Port Vale interim manager Danny Pugh says the club are set to bring in a new goalkeeper during the January transfer window.

Vale’s current number is the experienced Scott Brown and throughout the season his deputy has been Dino Visser, a summer addition to the ranks.

However, South African Visser has suffered a hamstring injury in training and the Valiants now need cover in case of any injury or suspension for Brown.

On Saturday, the Valiants had to name untested teenager Joe Collinge on the bench as cover for Brown in the absence of Visser.

The new keeper is set to be a youngster as, like other Football League clubs, Port Vale have limits on bringing in players over the age of 21.

4 January 2021: Manager John Askey leaves the club after a string of poor results but the club say that signings will be made by interim manager Danny Pugh.

11 January 2021: Port Vale sign former loanee Jake Taylor on a permanent three and a half year contract. The move means that winger Harry McKirdy is deregistered from the Vale’s League squad.

15 January 2021: Following his release by Bradford City, Port Vale announce the signing of striker Kurtis Guthrie on a deal until the end of the season. As a result, transfer-listed Theo Robinson is deregistered from the squad.

If you’re interested in a bet on Port Vale check out this betting guide too.

Reels of Joy casino is THE leading real money online pokies site with a wide selection of over 200 online games ranging from Video slots and Pokies, Video Poker games, Blackjack, Roulette, Progressive Slots and many more.

“We want to bring in a young player who we think has a lot of ability and a good future in the game. It’s not over the line yet so I will wait until that is confirmed, but we believe we have a very promising young goalkeeper.”

There is no indication on how long Visser is ruled out or whether any replacement will be signed on a loan or permanent basis. 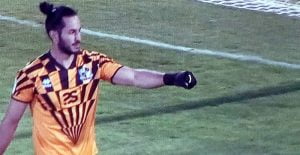 Visser’s injury means he is the latest Valiants player to join the injury list at Vale Park.

Striker Devante Rodney is missing because of a stomach problem, midfielders Danny Whitehead and Manny Oyeleke are also injured while veteran striker Tom Pope is out for some weeks with a broken arm.

Meanwhile, Theo Robinson and Harry McKirdy are both deregistered and unable to play in the first-team.

While Dino Visser’s injury is a blow, it is nothing compared to the issues facing the club in 2017 when the club managed to use a hefty NINE goalkeepers during the calendar year. You can read our feature on this here