What is this feature?

Over the summer weeks, we will present a digest of selected news stories and views from the the last week.

“Thinking of a word to describe the fixtures… dour.”

“The rebuilding process will take 2/3 years to build and mount a proper challenge for promotion. Small steps every season is the way forward…”

You can register for a free account on the forum. Why not join today and join over 5,000 more Port Vale fans?

OVF features you may have missed…

Richie Bennett agrees two-year contract with Port Vale
Vale have repeatedly made new forwards their priority this summer and the first one is now through the door. Former Carlisle United forward Richie Bennett has agreed a two year deal with the club following his release at the end of the season.

Fixtures for new season are revealed
Not the best looking set of fixtures in our opinion, but at least we know who next season’s league opponents will be after the release of the 2019-20 Port Vale fixtures. Anyone looking forward to the trip to Plymouth for the final game of the season?

Will Vale go for a Burton in the League Cup
In a frankly farcical cup draw held in a supermarket, it was revealed that Vale’s first round Carabou Cup opponents will be near neighbours Burton Albion. The Vale have at least landed a home tie in the first round. 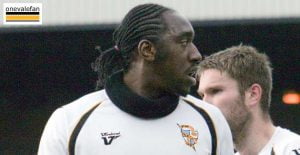 We also published a number of features on the site including these ones:

Exodus enters the Vale Fails list
It was surely only a matter of time before gangling midfielder Exodus Geohaghon was named in our Port Vale fails feature. One of the most maligned players in recent years, read our feature to find out more about his ill-fated Vale career.

Kaid Mohamed – still playing, still moving clubs…
In our “where are they now” feature we took a look back at former Port Vale winger Kaid Mohamed. He had a short and ill-fated two-year spell at Vale Park and he’s turned out at plenty of other clubs since leaving us.