Port Vale fail Exodus Geohaghon: the main target of the terrace taunts during one of the side’s most turbulent campaigns, Exodus’ stay at the Vale certainly was not a happy one.

Seen as a Gannon “favourite” he was played out of position and no-one deserves racist abuse. 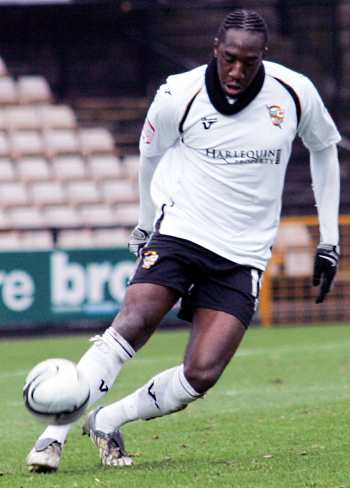 When manager Jim Gannon took over at Vale Park in 2011 he promised changes. While manager at Peterborough United, Gannon had converted central defender Exodus Geohaghon to a holding midfielder with some success. It was therefore no surprise when the towering six foot five inches tall player joined the Valiants on loan from Posh.

However, the problem was that Gannon upset both the players and fans with some controversial selections while Geohaghon wasn’t much of a midfielder. The selection of both Geohaghon and similar defensive midfielder Anthony Griffith in a defeat to Lincoln had to be defended by Gannon. Despite Geohaghon’s presence in midfield resulting in a run of just one win in four games, fans were baffled by Gannon saying “I couldn’t leave him out.” Gary Roberts, fans favourite and playermaker was left out instead, leaving the side bereft of creativity.

Subjected to jeers from the terraces, the gangling Geohaghon rapidly lost form and started to look woefully out of place in midfield. Things came to a head during Vale’s infamous loss to Accrington. Geohaghon confronted his detractors in the away end and later claimed he was racially abused. Even the axed Gary Roberts defended Exodus saying the abuse was “not acceptable” as the midfielder sought legal advice. It was to be his final appearance in a Vale shirt as he returned to his parent club following Gannon’s sacking. A later FA enquiry found there had been racist chanting towards the player.

Exodus Geohaghon had been a poor signing. He was seen as a “favourite” of the despised Gannon and perhaps as the symbol of Gannon’s regime on the pitch he became a terrace target. But he didn’t deserve racist abuse. It was a sad end to a disastrous Vale Park stay.