Former Port Vale striker Tom Pope has broken his recent silence on being released by the club describing his final two years as having “not much honesty or loyalty anymore.”

Pope, the club’s post-war record goalscorer was one of fifteen players to be released by the club at the end of the season. Following his release, manager Darrell Clarke paid tribute to the striker and the Port Vale Supporters Club are planning a range of testimonial events to pay tribute to the long-serving striker.

The way I was treated – it’s been a tough two years. There’s just not much honesty or loyalty anymore…

However, despite his many years at the club and the glowing tributes, it seems that the striker felt under appreciated in recent years. Discussing the last two years at the club, which saw the club taken over by the Shanahans, a lengthy ban for Pope after being sanctioned by the FA for offensive tweets and spells under both John Askey and Darrell Clarke the veteran striker told the Non League Paper: “Mentallly, the way I was treated – it’s been a tough two years. There’s just not much honesty or loyalty anymore.”

It’s unclear who the “honesty” comments are directed at, but the striker clearly felt he deserved more game time adding: “I’ve seen so many players go from playing 90 minutes, to maybe 60 minutes, to coming on as a sub. That’s life. But I went from being captain of the team and playing 90 minutes every week to basically being bombed out.

“The worst thing in the world for me is training all week and then not get any minutes on a Saturday. To put my body through that – especially at my age – and not kick a ball became more and more frustrating.”

The forward clearly felt he could do a job. He commented: “I’m quite honest with myself. If I couldn’t do a job anymore I’d stand up and say ‘That’s me done’. But I was sat watching players who weren’t as good as me starting games. The whole experience made me fall out of love with football, really.”

His comments perhaps explain his surprise move to Congleton Town where he will link up with former team mate Richard Duffy. It appears that Pope feels that the move will see him respected as he told the newspaper: “Duffs is someone who respects me, who trusts me and is a good mate. Now I’ve got a guy here that trusts me. Great people around. The club is very well run.”

“Obviously I’ve been used to a much better standard and I might get frustrated at times. But all you can do is not get too emotional about it and take it for what it is.”

Pope has plans for his future too adding: “Congleton have said I can do my badges with the youth team, the reserves or wherever I need to be. I’ve thought about buying property and maybe doing it up. Right now, though, I just want to get back happy, get back playing and fall in love with football again.” 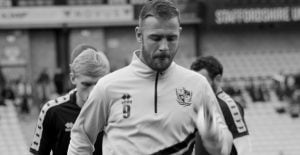 A selection of our recent articles on the post-war record goalscorer.