Tom Pope may not rival the likes of Martin Foyle, Wilf Kirkham, Tony Naylor or Darren Beckford, all of whom played at a higher level, as the club’s greatest striker – but his contributions during a troubling period for the club make him a worthy cult hero.

So, let’s revisit our OVF definition of a cult hero…

Step One: It’s a player who isn’t regarded as a club legend – as the best in his position.

Conclusion: That’s the case for Tom Pope who can’t match the impact of the four Port Vale forwards mentioned already and who tellingly doesn’t make our fans’ ultimate Port Vale XI. So, he’s not regarded as one of the club striking legends.

Step Two: However, it is a player who will be remembered for a long time for his contributions on and off the pitch.

Conclusion: Well, that’s more like it. Tom Pope put his body on the line countless times, while he was not in the elite echelon he was still an extremely good player during a difficult period, the post-war record scorer and he often courted controversy off the pitch. He’s definitely going to remembered at Vale Park for years to come.

So, that’s a big tick for Tom Pope, perhaps not quite an all-time legend, but definitely a Port Vale cult hero… 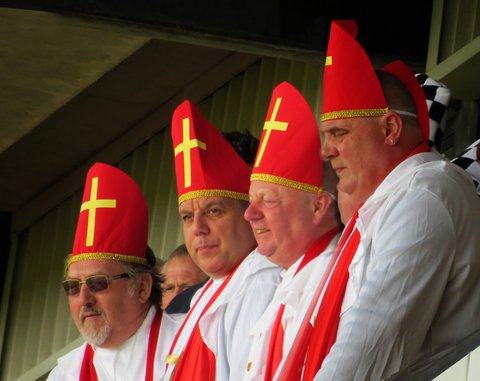 He may never join Naylor, Foyle and the likes as a club legend but for his contributions he will be fondly remembered as a Vale cult hero for years to come…

Tom Pope first joined Port Vale FC on the 28th January 2011 and it’s been an eventful time ever since. The striker, a boyhood Port Vale fan, started slowly at the club. Initially joining on loan, he agreed a permanent deal in August 2011 but in his first year fans may have questioned whether he was the answer to Vale’s scoring problems. After all, in the season prior to the 2012-13 promotion season Pope netted just five times in 45 games. and coming up to the start of the 2012-13 season he had just eight goals in 58 appearances. 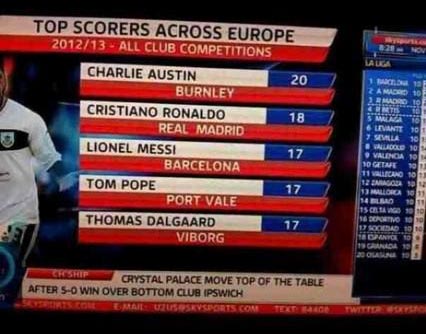 However, all that was to change during the extraordinary 2012-13 campaign when the club defied expectations and Pope caught the eye with his newfound goalscoring prowess. By November 2011, he was on the same tally as Lionel Messi near the top of the European goalscoring charts (see image). By the end of the season he had found the net thirty three times, a total which saw the club promoted, the player chaired aloft from the Vale Park pitch and Pope being handed the player of year award. It was the first of a record breaking three player of season awards for the forward.

That 2012-13 season appeared to be a breakthrough for Pope and in the following season, he proved to be a reliable and at times only source of goals for the club. After his first two seasons netted single digit goal totals, five of his next six saw him reach double figures as he set a new post-war goalscoring record at the club.

However, it wasn’t all plain sailing for the local lad. Pope’s use of social media provoked controversy and criticism, notably some ill-advised tweets following Port Vale’s FA Cup match against Manchester City. Pope received a six match ban as a result.

On the pitch, Pope was often seen as a “targetman”, a big unit with aerial prowess. However, his game was far more than just a tall presence upfront. Pope’s passing ability and link play was often overlooked but it was of high class as was his ability with the ball at his feet. Probably the main reason why Pope never played higher than League One was his lack of pace. Regardless of his turn of speed, or lack of, Pope proved to be a potent weapon on the pitch finishing his three spells at the club with 115 goals from 343 games.

His contributions were often welcomed during what was a tricky period for the club. During his time at the club the striker played for controversial owners such as the “MOLD” board and Norman Smurthwaite and also saw the club he supported plunge into administration. At times, until his release in 2021, Pope was a rare positive as the club floundered in the lower leagues.

So, he may never join Naylor, Foyle and the likes as a club legend, but for his contributions he will be fondly remembered as a Vale cult hero for years to come. Thanks for the memories Popey, it’s been quite a journey! 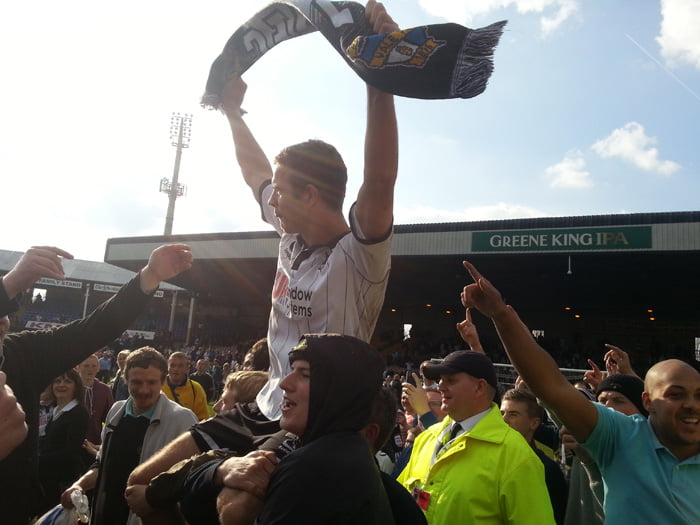