Mention wide players to the average Port Vale fan and the names Guppy, McCarthy, Ainsworth and Chamberlain will probably crop up. It’s not that likely that “Gary Ford” will. However, Ford was an often underrated player who deserves a cult status for his part in some memorable John Rudge moments.

Ford and Simon Mills arrived in December 1987 for a combined cost of £60,000 and they were an absolute bargain…

Ford was one of the key signings when John Rudge re-shaped his squad after the big money sale of Andy Jones. Some of the £350,000 profit would go on the likes of David Riley (1987), Paul Atkinson and Ron Futcher (both 1988)  but arguably the two most important purchases were made at the end of 1987. Ford and Simon Mills arrived in December 1987 for a combined cost of £60,000 and they were an absolute bargain.

Ford had already made over 400 appearances for York City but Rudge snapped him up from Leicester City for just £25,000. His impact was considerable but it was often on the sidelines rather than in the spotlight. That famous cup win over Spurs? It was Ford’s surging run that freed space for Ray Walker’s famous goal. The promotion season of 1988-89? Ford’s eight goals from the flank (including this absolute beauty against Huddersfield) are often overlooked.

The wideman spent four years at Vale Park and although his spell was rocked by injuries, including a serious achilles problem, he notched up 91 appearances and thirteen goals. He left the club to join Mansfield Town in 1991 in part-exchange for Kevin Kent.

Ford may never have the same headlines as Guppy, McCarthy and co but his intelligent wide play, consistency and his support role in some seminal Vale moments earns him a deserved place in the OVF Cult Hall of Fame. 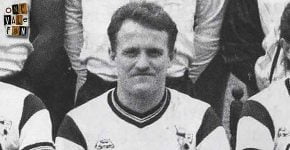