Cult hero Jim Arnold: a veteran goalkeeper who appeared to have the perfect ending to his career – only to return for a final hurrah! 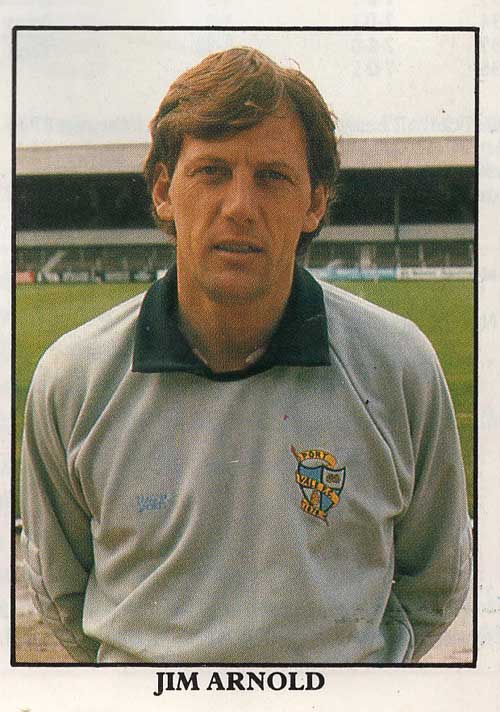 Stafford-born Jim Arnold had already had a long career in football before joining the Valiants. Signed from non-league in 1979, h had been a regular at first club Blackburn Rovers for two years but after joining Everton he had been the long-standing back-up for the outstanding Neville Southall. As a result, Arnold made just 48 League appearances over three years at Goodison Park.

“ It proved to be a massive success. Arnold was crowned player of the year as the club won promotion…

So, it was probably a relief to the player when he joined Port Vale in 1985 and was immediately made first-choice goalkeeper. At the age of 35, it was probably Arnold’s last chance of regular League football. It proved to be a massive success. Arnold and towering central defenders Phil Sproson and John Williams proved a potent backline with Vale conceding just 37 goals all season – the best defensive record in the division. Arnold was crowned player of the year as John Rudge’s side won promotion out of the Fourth Division.

Arnold decided to retire on that high note and he took up a role with Staffordshire Police.

However, Port Vale were plunged into a goalkeeping crisis in the 1986-87 season when Mark Grew, Arnold’s replacement, suffered a serious knee injury. Arnold was approached and agreed to sign on a non-contract basis. He made a further fifteen appearances before the Valiants signed Alex Williams as Grew’s replacement.

It proved to be the final League appearances for the popular goalkeeper. Arnold may not have reached the “legend” status of Vale keepers such as Ray King, Paul Musselwhite and Mark Goodlad but he certainly packed a lot into his two year stay in Burslem. Liked by fans and players alike, teammate Robbie Earle said of Arnold “you could not wish to meet a nicer, more level-headed fella”.

Cult credentials: Player of the year, won promotion, helped the club out in a crisis