One of the frustrations of early Port Vale 1920-21 squad line-ups is the lack of names – making it difficult to identify players of yesterday. We’ve had a go at the 1920-21 squad.

The task for this was admittedly made easier by the proliferation of Pinnace cigarette cards at the time. Players were photographed individually on the cards but with their names attached and it is through these that we have identified most of the players from this 1920-21 team group.

This season, like so many in the history of Port Vale was one of two halves. The Port Vale 1920-21 squad started really brightly and quickly recorded the league double over local rivals Stoke City. However, the club decided to sell star striker Bob Blood for a club record fee in February (mainly because Vale were once again strapped for cash) and the season petered out as the club finished in seventeenth position in Division Two. One consolation was that it was still three places above their neighbours Stoke City who finished twentieth. 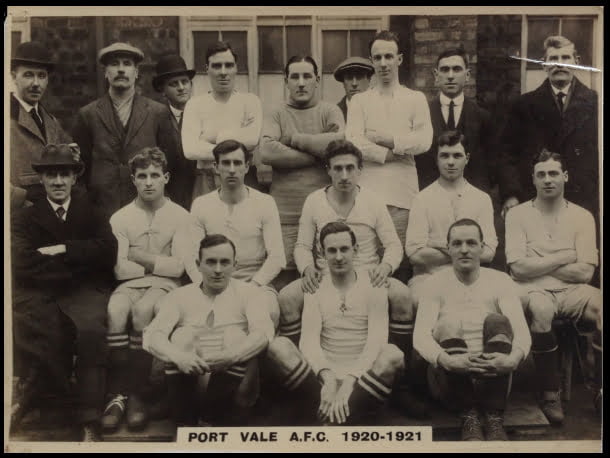 Back Row left to right (players only)

TOM LYONS: By then a veteran of 35, defender Tom had previously played for Aston Villa. He played 32 games but was released at the end of the season.

WALTER SMITH: One of three goalkeepers used that season, Smith was signed in October 1920 but not without drama. He was charged with assault and his first game saw a detective watch him from the stands. Smith’s trial took place in November when he was found not guilty and he went on to play 29 times before his stay was ended by injury in December 1921.

PETER PURSELL: The younger of the two Pursell brothers who acheived great things with Vale in the 1920’s. The former Scottish International signed from Rangers in 1919 for a £1,500 fee and stayed with the club for five years.

UNKNOWN: If you know who this player is, do get in touch.

TOM PAGE: Another veteran, Page was 32 years of age that season. But age didn’t seem to be a problem for Tom – he stayed with the Vale for eight more years until the grand of age of 40. More about him here

BOB BLOOD: Blessed with one of the more memorable player’s names, Blood packed a ferocious shot. One of his penalties was saved by the keeper but at the expense of breaking both wrists. He scored twenty goals from 26 appearances before being sold in mid-season More about him here

BILLY FITCHFORD: A locally-born player who played as an inside-left. He played 25 times scoring three times.

UNKNOWN: It could possibly be long-serving Bob Connelly but we cannot be certain.

JOE BROUGH: A forward then in his third spell with the Valiants. It wasn’t a prolific season for Joe as he hit just one goal in 31 appearances. More about him here

BOB PURSELL: The star defender, Bob had left Liverpool to link up with his brother at Vale. The pair hit their stride in the following season when they recorded a then club record seven consecutive clean sheets. More about him here

BILLY BRISCOE: A long-serving player who was then in his first spell with the club. He moved to non-league for a brief spell before returning in 1924 and continuing on till 1931. In total he made more than 300 appearances. More on him here

The manager JOE SCHOFIELD is on the far left of the middle row. Schofield brought the influential Pursell brothers to the squad and laid the foundations for one of Vale’s most successful spells. Schofield was in charge when Vale started the 1929-30 season but sadly Schofield died midway through it. The side went on to win the division and would finish in the club’s highest-ever league position the following year. More on Joe Schofield here