Port Vale have been handed a major boost with the news that captain Tom Conlon is making good progress in his return from Achilles surgery.

Conlon was ruled out of action in March and missed the rest of the season. However, the skipper earned plaudits with his work pitchside encouraging his team mates and also for his commitment to Port Vale community events.

However, it is on the pitch itself where Conlon’s influence is the greatest. The locally born midfielder contributed set-piece prowess and ten goals during the 2020-21 season. The 26 year-old will add guile and invention to the Valiants midfield as well as looking to prove himself in League One.

According to the Sentinel newspaper:

He’s hoping to be able to rejoin the squad for full training in four to five weeks. However, the fact he’s likely to miss Vale’s pre-season games means the opening game of the campaign, at home to Fleetwood on July 30, will probably come too soon. 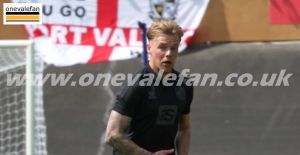 WHAT DO YOU THINK OF THIS NEWS? – CLICK HERE TO POST A COMMENT
About the author: A Port Vale fan since 1980, Rob Fielding created this website in 1996. Originally called "There's only one Vale fan in Bristol?" it became simply onevalefan or OVF for short. You can get updates on Twitter through the account @onevalefan