According to a journalist, League One rivals Morecambe have expressed an interest in Port Vale midfielder Jake Taylor.

Note: this is a rumour there has been no confirmation from either club regarding this story.

Taylor has endured an injury-ravaged season but nevertheless he impressed at the tail-end of the season with his performances against Swindon and Mansfield Town in Vale’s successful play-off campaign.

Former Nottingham Forest midfielder Taylor, originally joined the club on loan in 2019 after a period training with the Vale first-team squad. His loan spell was a runaway success with Taylor netting seven times in 25 games.

The Valiants put in a permanent bid for the player in the summer of 2020 but instead the player joined Scunthorpe United on loan. However, the Vale were not to be deterred and put in another bid for Taylor in January 2021. This was accepted and the midfielder joined the club on a three and a half year contract.

Taylor has undoubted talent but his progress since joining has been disrupted by injuries. 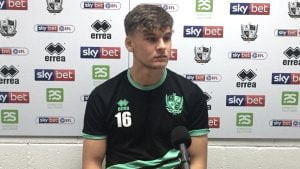 Journalist Alan Nixon claims that Morecambe are now interested in adding the midfielder. However, whether Vale will be interested in selling a player who still has two and a half years on his contract, whether Taylor wants to move on and whether Morecambe can afford the fee remain to be seen.

HAVE YOUR SAY ON THIS RUMOUR – CLICK HERE TO POST A COMMENT
About the author: A Port Vale fan since 1980, Rob Fielding created this website in 1996. Originally called "There's only one Vale fan in Bristol?" it became simply onevalefan or OVF for short. You can get updates on Twitter through the account @onevalefan