We have the briefest of reports of a significant result for Port Vale back in 1930. Here’s the background to Port Vale’s thrashing of Bradford Park Avenue.

In 1930, Port Vale entered new territory. A remarkable 1929-30 campaign had seen the side canter to their first-ever promotion despite the sad death of manager Joe Schofield in mid-season. Schofield’s deputy, Tom Morgan, had taken over as manager and now had the pressure of guiding the club in the Second Division. Vale needed rebuilding too. The promotion the previous season had relied upon an ageing strike  force of Sam Jennings and Albert Pynegar and it wasn’t just their age which was concerning. After more than a season together the pair didn’t get on.

Morgan brought in two new signings in the summer but kept the bulk of the promotion-winning squad (the likes of Jimmy Oakes, Roger Jones, George Shenton, Phil Griffiths and Jack Round all played more than 30 games in the higher division). However, the side got off to a slow start with just one win in the opening four fixtures. The only bright side was the prolific Jennings had netted four goals in those games. The side than sprang to life with a run of three straight wins. There was a 2-0 win over Cardiff City, a thrilling 3-2 away win against Everton in front of 27,000 fans and then… Vale faced Bradford Park Avenue.

In those days, home and away games against clubs often came closely together. In September, Vale had travelled to Park Avenue and suffered a 5-1 LOSS, which made the return fixture just FOURTEEN days later all the more surprising… 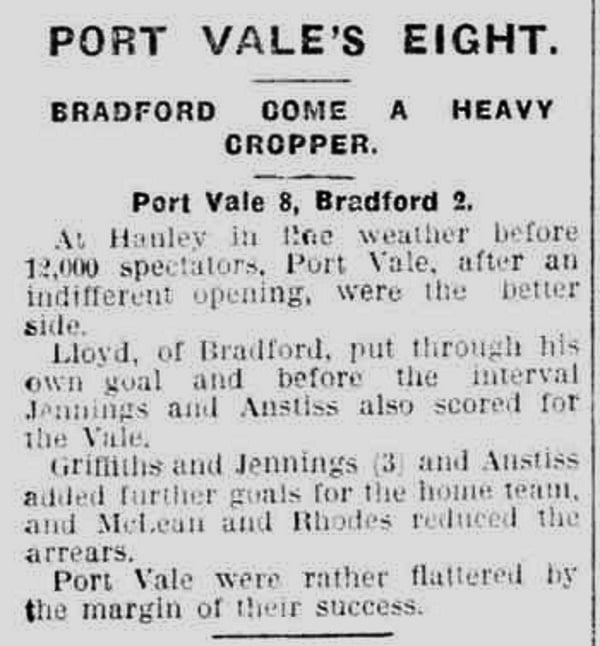 It’s a report that somewhat downplays the emphatic Vale victory. They had hit the target eight times with veteran Sam Jennings netting four – making it eight goals in just seven games for the striker. Jennings, (pictured right) who was to sadly die during World War Two, was a maverick striker who reportedly “trained” by racing his greyhound to the ball. He would finish his playing career playing for the likes of Olympique de Marseille in the French Leagues. There was also two goals for another veteran – Harry Anstiss – a 31 year-old, who had fought in World War One’s Battle of Jutland at just seventeen years of age. The other goal came from Phil Griffiths, another maverick character who had walked 170 miles from South Wales to the Potteries in order to undertake a trial.

Soon after this result, Jennings’ regular strike partner Albert Pynegar had enough. He made a transfer request and left the club bringing an end to his fractious relationship with Jennings. To replace him, Vale bravely splashed the cash bringing back Stewart Littlewood for a then club record fee. Littlewood was to have a disappointing return with just two League goals but the club exceeded expectations. They finished fifth in Division Two – the club’s highest position in its history. Jennings was the top-scorer with seventeen goals – the veteran had hit a remarkable 44 goals in 65 games in his two season spell with the club. He would leave at the end of the season to join Stockport County.

As for opponents, Bradford Park Avenue… They finished sixth, just one place below the Valiants, thus showing they were no pushovers and making Vale’s 8-2 victory over them even more remarkable.

We’ve written several articles on this period. Why not read these features: