Cult hero Jimmy Oakes: renowned as a “clean” defender who rarely fouled or was booked, Oakes was widely regarded as one of the finest defenders never to picked for England. He’s a worthy entrant to our cult hall of fame…

Oakes, born and brought up in Hanley, played for junior sides Bethesda Mission and Milton Albion before joining Port Vale as an amateur in August 1923. He made his debut that year and became a regular in 1924. He quickly earned a reputation as a “clean” player who never resorted to dirty tricks on the field.

A consistent first-team pick for the first six years of his Vale career, he was selected for the “Rest” (effectively a Football League select XI) against the England side in 1928 and his cult status at the Valiants was further enhanced after he scored a goal from his own-half (albeit wind assisted) against Stockport County. He then starred as the Vale won promotion in 1930 and was a key part of the defence as Vale finished in their highest-ever league position in 1931.

However, as is so often the case with Port Vale, money woes caused Oakes to be sold to Charlton Athletic for £3,000 in 1933. However, there was a twist to the tale. Oakes had appeared for Vale against Charlton in an abandoned FA Cup tie. He therefore took the field, this time in Charlton colours, for the re-arranged fixture.

Sadly, World War Two then intervened and Oakes’ professional career came to an end. To those who watched him in the 1920’s and 1930’s he was widely regarded as the finest right-back never to be picked for England. Yes, the boy from Hanley was that good… 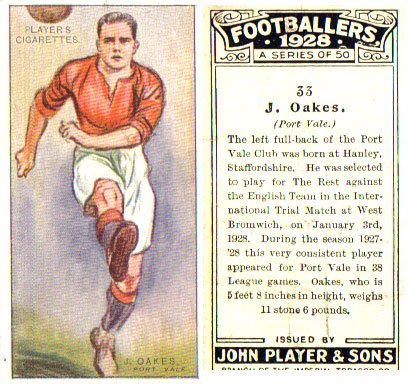