Port Vale have confirmed the return of forward Louis Dodds on a season-long loan spell from Chesterfield.

Dodds spent eight years at Vale Park, having joined in 2008, before he left to join Shrewsbury Town in 2016. He helped the club win promotion in 2013.

“ I’ll have to get my sleep, because I will be doing all of Popey’s running again…

He commented: “I’m absolutely buzzing. This was the only club that I wanted to come back to and I am grateful to the manager and chairman for making it happen.

“I love playing with Tom , I think that we work quite well. We both have a footballing brain but we may not have the speed that some teams have got but you don’t always need that in partnerships.

“I’ll have to get my sleep, because I will be doing all of Popey’s running again.” 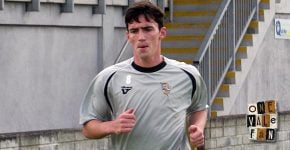