Can Port Vale climb out of the relegation zone with an away win over Coventry? Read our brief guide to the action…

“They have got some experience, strength, height and physicality in the side. I went to watch them against Shrewsbury and they were not bad. The first half was poor but then got themselves into a two goal lead in the second half and with Chris Eagles and Ryan Taylor on either flank they have got some decent quality in there. They have got decent quality of delivery into the penalty area and they will try to have a go and fight.”

The Valiants are likely to keep the same starting eleven that defeated Shrewsbury Town which means that Deniz Mehmet (right) will keep his place in goal and the returning Ryan Taylor should also play after scoring in the Shrewsbury win.

The Valiants slumped to a 2-0 home defeat earlier this season. 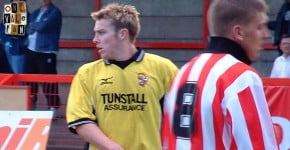 Forward Steve McPhee was possibly Vale’s best-ever addition from Coventry. The forward never made a senior appearance for City and joined the Valiants on a free transfer in July 2001. He scored on his debut and rose to prominence in the 2003-2004 season with 27 goals. That tally prompted much interest in the out-of-contract striker and with some controversy he left for Beira Mar in Portugal in the summer. He subsequently played for Hull City and Blackpool before retiring through injury in 2010.

You can read our cult hero article on McPhee here