Should Vale Park have been completed last century?

Yes, hindsight is a fine thing, but Rob Fielding argues that an alternative design for the Lorne Street stand would have been a better option for the club.

To this Vale fan, it’s funny how the passage of time and a person’s passing often results in a revision of history, often in favour of the deceased person. I think this is true with Vale fans’ perception of former Chairman Bill Bell. While Bell’s most criticised acts were the sacking of John Rudge and the subsequent descent into administration, he is often praised for the redevelopment of Vale Park.

While the redevelopment of the ends of the ground were essential and used Bell’s infamous money-saving nous (using Chester City’s old grandstand for the Hamil End was a stroke of genius and it remains one of the finest stands in the ground) I believe he made a monumental misjudgment with his plans for the Lorne Street stand.

When Bell announced plans for the Lorne Street stand, it was the most ambitious plan since the club had moved grounds in 1950. 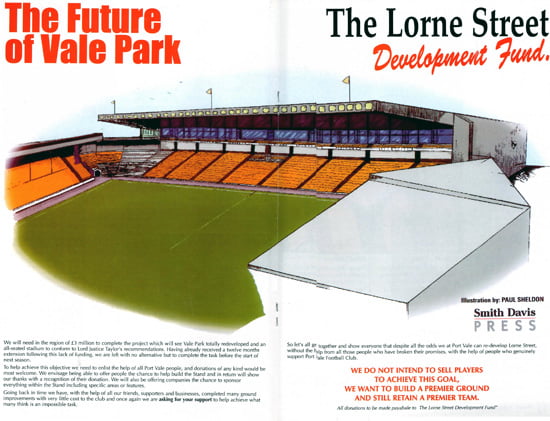 The plans unveiled in the matchday programme 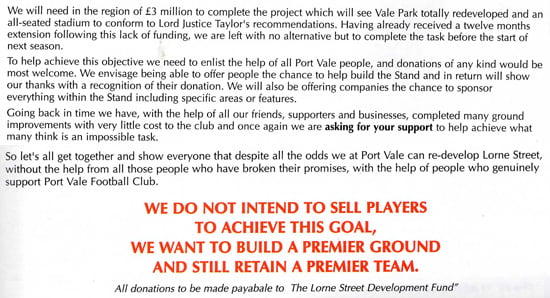 A closer look at the text

The true cost of the Lorne Street may never be calculated. Initial costs were calculated at £3m before Bell took the club into administration. The Bill Bratt board pledged £400,000 towards completing the stand when they took power but unsurprisingly that wasn’t enough. A further loan of £2.5m from Stoke City council should have been enough. However, it’s debatable how much of the loan was used on the stand. The roof was completed and other work done but the stand still remained half-finished. Norman Smurthwaire added a reported additional £75,000 recently and yet still the stand remains unfinished.

“ Was the original Lorne Street stand plan too large, too expensive and too ambitious for Port Vale?

It’s hardly surprising that Chairman Smurthwaite has other priorities ahead of completing the stand, especially as the ground is mostly three-quarters empty these days. All of which begs the question – was the original Lorne Street stand plan too large, too expensive and too ambitious for Port Vale? As OVF noted at the time, 48 executive boxes was a larger number than the then national stadium (the old Wembley stadium) contained.

Let’s look at an alternative…

Two years before the Lorne Street development, Wycombe Wanderers were also engaged in building a stand of their own. The Frank Adams stand was less ambitious than the Vale Park plan but nevertheless, it was still a multi-million pound project.

It cost £1.5m but with half the money coming from the Football League’s Ground Development Trust, it cost the club just £750,000.

When Vale started planning the Lorne Street stand, they sold Gareth Ainsworth for £2m and declared the £1.5m profit would go towards the stand. If they had followed the Wycombe plans, they could conceivably have funded it with that money and still had money left over to go back into John Rudge’s transfer fund. Who knows where the side could have been with that three quarters of a million cash injection?

“ The Frank Adams stand was completed in JUST one summer. Compare that to the seventeen years that Vale fans have been waiting…

But what’s key is that the Frank Adams stand was completed in JUST one summer. Compare that to the seventeen years that Vale fans have been waiting for the Lorne Street stand.

A stand along the lines of the Frank Adams would have given Vale Park stands on all four sides, it would have given the club twenty-odd executive boxes (and seventeen years of revenue from them) and it would have meant the club had a capacity of around 20,000 and needing little in the way of ground development costs.

Hindsight is a fine thing, but did Bell blunder when he approved those Lorne Street plans? I think so.

A tale of two stands… 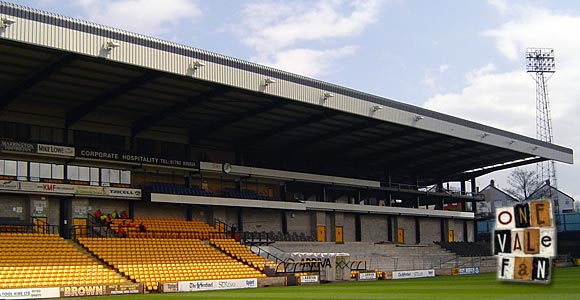 Construction time: Several months (built in the summer of 1996)