And the lady lost her dog

In Barry’s latest memoir there are post card views of Kings Park, Perth Western Australia, plus stories about an athletic coach with unconventional training regimes, a visit form the local plod, and a lady who lost her dog. Yes, it’s all here.

*****
And the lady lost her dog
It was a simple formula compared to other training programmes back then and since: one hour runs interspersed with short sprints of approximately 100 metres. There was nothing new in this method of preparing for the middle distances because the Fins had introduced it back in the 1930s and refined it over time calling them ‘Fartlec Sessions’.

What was unusual about the way we applied this training method was my Coach’s weird decision to run at any time of the day and night with the occasional timeslot of midnight or very early morning. Don’t get me wrong, he wasn’t a crackpot or anything like that – just a little unconventional.

The various venues for our ‘Fartlec Sessions’ included the tracks of the State Athletic Centre, the streets in and around our suburbs, the long Western Australian beaches and sand dunes, the mountainous territory in the nearby Perth foothills, some desert country, and Kings Park, Perth. 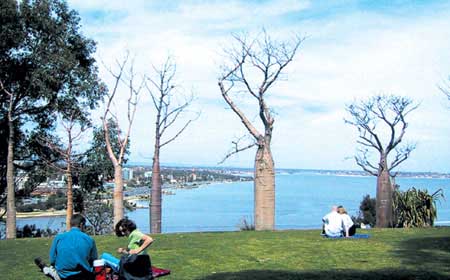 A view of the Swan River from Kings Park
Kings Park is approximately 400 hectares (4 square miles) and contrasts a high limestone ridge – named Mount Eliza, with its rugged scarp descending steeply to the edge of the Swan River – to one of the most beautiful botanic gardens in the southern hemisphere. The several scenic drives, many picnic spots and children’s playgrounds, treetop walks, lookouts, restaurant and tearooms all add to the splendour that is Kings Park. Then you have the many nature walks snaking through the heavily wooded areas of the ‘Park that are well trodden by nature lovers, young lovers, occasional joggers and serious athletes, to name just a few. 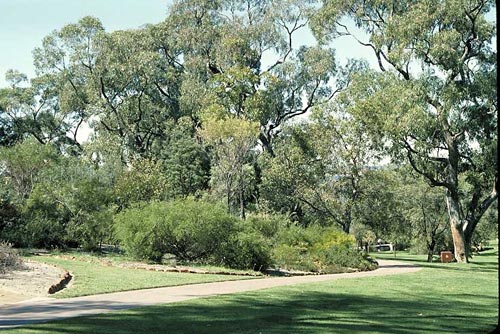 If only the wooded areas could speak
There was that time late one evening when my coach and I were speeding down one of these ‘walks’ when yours truly was sent flying through the air consequence of two young lovers resting between kisses. But maybe I’ll tell you about that some other time.

The advantages of our coach/potential star relationship was doubled because we both worked for the same company; he was its service manager; yours truly its finance manager. Many a time we would train before work, at lunch times, after work and, as mentioned above, all other odd times of the day and night.

One time, after stumbling across the marathon finish line, my coach yelled over to me to get my backside down to the nearest beach so that I could warm down and for him to review what was, in his opinion, my poor endeavour during the race: yours truly had come home fifth; but he wasn’t happy saying I’d never get to the top pussyfooting around pretending to be the athlete; and that a little shock therapy would be good for me. I wanted to tell him where to shove his ‘shock therapy’. But prudence and a still tongue saved me that day. Yes, he could be ill tempered from time to time, and not always because of me. However, there were times I copped the brunt of his displeasure generated elsewhere.

So, combining Finnish Fartlec sessions, Kings Park, Perth, Western Australia and a coach subject to occasional ill temper, the scene is set for my next story.

It had been one of those hot midsummer days and we didn’t have air conditioning back then. My coach, wearing his service manager’s hat, had been caught up resolving staff issues and by 5pm was in no mood for a post work training session. He said to meet him around 10pm near the Royal Kings Park Tennis Club. I nodded my agreement and went home. By the time we met up at 10pm the night sky was brightly lit by the moon and stars and the temperature had dropped to around 28 degrees Celsius. Sadly though, my coach’s emotional temperature was way too high and he was still niggardly about the day’s employee issues. Needless to say, I wasn’t looking forward to our Fartlec session one bit.

There were guttural remarks that he wasn’t in the mood to detail my technique – checking me only as need arises. It was music to my ears. But did I misunderstand what he said?

We hadn’t gone more than a mile when he started in on what he perceived to be my less than full attention to the job at hand and emphasised this several times by yelling the ‘b’ word. Yes, the one that says your mother and father aren’t married. By the time we were down by Crawley Bay, with its very up-market residences, his mood had become quite fowl. He was literally yelling that he was fed up with it all and that I would be subject to horrendous injuries of the legs, even death, if I didn’t extract the digit and show better performances on and off the track. Sadly, some of the expletives used to stress his displeasure cannot be repeated here.

Now I know it wasn’t me that had been giving him such grief that day. But it was me bearing the full brunt of his ire. Folks, it was more than I was prepared to take and, to his absolute surprise, I change course and immediately headed back to our cars at the ‘Tennis Club – showing him a clean pair of heels. I was well and truly heading for home before he got back to his car, and was snug in bed by 1am.

By 8am I was at my workstation ready for another day. But where was the service manager? Where was my coach? Had he taken the day off to rest? Was he too embarrassed to show because of what had happened late that night? Had he had an accident on the way to work? What?

It was suggested we wait until 9am before calling his home to see if he was okay.

The time between 8 and 9am seemed an eternity because I was wondering if he may have been mugged after I had left him behind in the ‘Park. I simply could not concentrate on company matters. Then, out of the corner of my eye, I noticed the secretary point two well dressed gentleman in my direction. Oh dear, I was thinking, what the hell is this all about?

After officiously introducing themselves as members of the local plod, and establishing that I was indeed Barry Edge, they asked me to detail where I was and what I was doing between the hours of 10pm and midnight the night before. With nothing to hide I gave them more than a detailed account – ending with a statement along the lines that I was still very annoyed and will be taking the issue further when my coach chooses to turn up for work.

With that they closed there notebooks and headed for the door.

‘Hang about’ I said ‘I think I’m due a courtesy reply as to why you were talking to me in the first place’. After all, there had been no wrongdoing on my part so I told them I deserved that at the very least. They both looked at each other and, with their officiousness now replaced with a measure of good humour, stated there had been a misunderstanding. But emphasised that under the circumstances the police were obliged to follow up.

They explained that at around 11.45pm the night before an elderly lady – a Crawley Bay resident – was walking her dog when she saw two men running through the ‘Park and thought that one of them was in fear of his life or broken limbs should his pursuer catch him. It seemed the lady had rushed to the nearest public telephone to alert the police – telling them the two men were heading in the general direction of the ‘Tennis Club.

With that the plod left the building – turning only to sarcastically ask that should I see a Scottish terrier wandering around Kings Park to let them know because in her moment of fright the lady from Crawley Bay had let go of the leash and it had run off into the ‘Park.

It was around 9.30 when my couch arrived in the office and without a sideways glance to any of us walked rapidly into his office closing the door behind him – a clear sign to all not to disturb him no matter the situation. But yours truly was not going to put off any longer: first, there was the debacle of the night before; then a morning visit from the plod. No sir, enough was enough. I strode briskly towards his door, rejected the pleas of the secretary not to enter, flung it open, sat down on the opposite side of his desk, looked cold steel into his eyes and loudly asked what the hell was going on.

His story? Whilst he was changing into his track gear at the ‘Tennis Club he had been spotted and spoken to by the ‘Park security and his car registration noted. At that point in time the ‘Park security was unaware of what had happened in the previous hour or so. Then, around 4am the plod were waking him from his slumber to ask the same questions that yours truly had responded to.

After that episode I kindly warned my coach that I was no longer prepared to be the brunt of his anger consequence of his or other people’s behaviour. Well, it did work after a fashion. But it was never as bad as in previous times.