Over time there have been many stories of the loss of a canine, feline or feathered friend in our respective families. This one is from our regular columnist Barry Edge in Western Australia.

***
Clancy
He came into our lives on the 4th January 1993, a buckskin aristocrat with a thumbnail white spot on his forehead. Golden Chokita was his competing name; Clancy was his stable name. He was foaled 14th October, 1980. His mum and dad (Ted & My Tina) had enjoyed success on the race track and it had been the owner’s hope that Clancy would follow suit. But it wasn’t to be.

Our granddaughter’s interest in horses was a chance discovery when we attended a political BBQ fundraiser where two teenage girls with their horses were giving the children rides around a small paddock. Our granddaughter lined up with all the other girls and boys and patiently waited her turn. Now you’ve all heard the phrase ‘like a duck to water’? Yes? Well folks, when Samantha Ann first sat in that saddle and was led around the paddock it was as though she had been doing it all her life – and she was only 11 years old. There was no mistaking that she was hooked big-time.

Prior to this event Samantha had tried all the usual stuff of softball, Brownies, netball, little athletics and so on and whilst enjoying some successes the challenges they offered fell short of her expectations and she quickly tired of them. We were beginning to wonder what, if any, interest would hold her attention. We even thought of asking her to try the martial arts.

It was Mrs AR who spotted the similarity of our granddaughter enjoying her own company – just as she did when she was young. Don’t get me wrong, Samantha was and still is a great social person. She loves to party with her mates, enjoys organising social outings and travelling the world is becoming second nature. When all is said and done she constantly needs challenges in all that she does – just as it was when she was eleven years old.

Samantha loved to stay over on weekends, we loved to have her over and our daughter was happy for the personal space it gave her. Whatever we did on those weekends always included Samantha Ann whether it was going to eateries, or picnics in the park, or walks in the hills and, of course, political BBQ fundraisers.

No sooner had Samantha Ann finished her first horse ride she raced to the rear of the dwindling queue for another ride, then another, and another until she was the only one left. Mrs AR came over to me and whispered something along the lines of “I think we’ve hit the jackpot”. Folks, no truer words were spoken.

On our journey home Samantha talked incessantly and excitedly about the horses and the rides and “Can we do it again”. The following Sunday yours truly was sitting ringside whilst Samantha Ann enjoyed her first riding lessons at the nearby Broadacres Riding School. This then would be the weekend pattern for the next two years between 1991 and midsummer 1993. During this period our granddaughter was encouraged to enter dressage, show jumping and cross country events – using the ‘School’s horses. A few blue ribbons, many red and the odd white one later the Principle of the ‘Riding School suggested to us it would cheaper to own a horse than to hire their horses for the many lessons, one day events plus stable costs at the ‘Riding School. We said we would get back to her.

Folks, we knew hardly anything about horses, let alone setting out to buy one.

In those first two years that Samantha had been riding we often shared time talking to Billy. That is: Billy spent time helping us to understand much about horses and their care. Then one day he said he had been looking for a good home for one of his horses and being aware we were in the market made the suggestion that Samantha and Clancy were ideal for each other. Both had strong characters; both needed the higher level challenge factor; and both were fiercely loyal to those who cared for them.

Just as it was at that political BBQ fundraiser, no truer words were spoken. 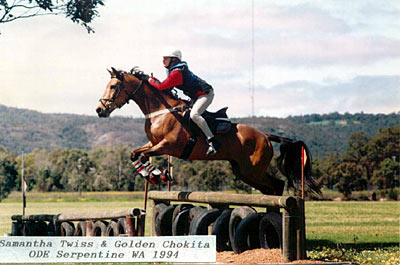 Sam & Clancy, as they became known in the riding fraternity, would have their differences when on the training track or in the stables. But when she was in the saddle on competition days their minds became as one and they were always there for each other. When granddaughter was having a bad hair day she would seek Clancy’s counsel. He didn’t criticise her, never gave her the wrong answer and seemed to understand her miserable moments. She loved him dearly and he returned it tenfold and the trust between them was never in question.

Initially we all shared the stable duties plus gearing up for competitions. But over time Mrs AR carried out most, if not all the stable duties – particularly in Clancy’s retirement years. We all loved him dearly and he returned it tenfold and the trust between us was never in question.

Then, on the morning of 17th February, 2005 we said goodbye to Clancy. It was an agonising decision to take for our granddaughter and we’re still trying to come to terms with it all. It’s true he was getting on in years and, until recently, had rarely been sick – a sniffle at most. But Clancy was beginning to pick-up knocks and scratches and becoming unsteady on his legs. In human terms he was getting old and on the advice of the agistment centre owner Samantha conceded it was time.

If it was the right decision to take, why then do we feel so lousy, and will we ever get over his sickening feeling that we have betrayed his love and trust in us. All that we can do is to say we’re sorry that it ended this way. You see, Clancy wasn’t just a horse. He wasn’t just a pet either. He was a member of our family. He was Sam’s best friend – as she was his and because of his part in our lives we have networked and met many fine people, some of whom are now our best friends.

For the first time in 12 years Mrs AR didn’t go to the stables to do her weekend chores. Instead yours truly took her on a weekender up the track.

Samantha had a few friends over to share a drink in celebration of Clancy’s life. 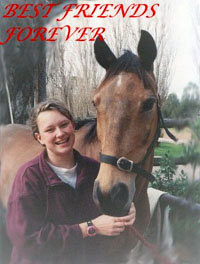