Veteran goalkeeper Scott Brown could be between the sticks when Port Vale travel to Exeter for their first game of the season.

Exeter signing Jamal Blackman rumoured to be a Vale target in the summer, but the former Chelsea goalkeeper failed a late fitness test for the Grecians’ opening game against Lincoln City.

It meant that Brown, now aged 37, made his debut for Exeter, just over a year after joining the club. The match itself finished 1-1.

Former Port Vale player of the season, Brown, made 144 appearances for the club during a three year stay from 2018 to 2021.

He was released in the summer of 2021 and moved to Exeter City as goalkeeper player coach. He didn’t make an appearance for the club last season when they were promoted from League Two but Blackman’s misfortune means Brown has a chance of facing his former club on Saturday. 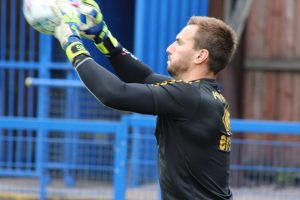 WHAT ARE YOUR MEMORIES OF SCOTT BROWN? – CLICK HERE TO POST A COMMENT
About the author: A Port Vale fan since 1980, Rob Fielding created this website in 1996. Originally called "There's only one Vale fan in Bristol?" it became simply onevalefan or OVF for short. You can get updates on Twitter through the account @onevalefan