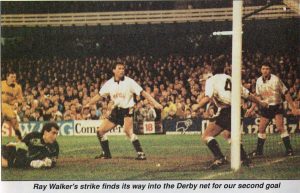 Port Vale pulled off arguably their greatest away victory in the FA Cup by beating top-flight Derby County in a replay. The winning goal came from a superb counter attack with Darren Hughes’ surging run setting up Nicky Cross to tap home at the far post.

I was working in Derby so knew the town well. I used to play five-a-side on the pitches right next to The Baseball Ground. I drove over from Stoke with my two brothers and a mate. We were absolutely crammed into the away end and rumours started spreading that there’d been an incident on one of the trains taking fans to Derby. I can’t remember if the kick-off was delayed. The pitch was awful, it always was at The Baseball Ground, and that probably helped us. The image of “Yozza” Hughes tearing down the pitch to set up the Nicky Cross’s winning goal is something I’ll never forget. They brought on the the 9 foot 6 forward Kevin Francis (later with Stockport) late on, he pulled one back for them to make a late charge and if I remember correctly, he also missed a bit of a sitter. We were in the middle of a real purple patch. We’d just stuffed Ipswich 5-0 and beat West Brom away 3-2 in the next game. Happy times.

I was teaching at a local high school and on the afternoon of the game, there were a couple of good kids in my GCSE History class – who were never away – who weren’t there. I thought little of it until I made it to the Baseball ground and spotted them trying to hide behind their dads for the duration in the hope that I hadn’t seen them. Obviously I asked them if they’d enjoyed the match in the next lesson…

Quite a rare event, I think it is the only time we have beaten a top tier team away in a cup replay. Three goals against a defence containing the then England goalkeeper (Shilton) and centre-half Mark Wright.  I remember being marshalled out by by the police, presumably to where the Vale coaches were, in the opposite direction to where I had parked my car having travelled from Leicester.

One of my all time favourite Vale games. My memories of this is more about the Vale support. An absolutely huge following and we were jammed in like sardines. Amazing atmosphere and that Darren Hughes run. Great night.

We’ve had some absolute belters in the Cup, but this was my favourite. I was 12 at the time so the memories are a little hazy, but I remember the massive queues at the turnstiles at the Baseball Ground and me and my Dad being in the seated area behind the goal. The ground was compact but with steep stands on each side, and was packed which made for a fantastic atmosphere with the big Vale following going toe-to-toe with the Popular Side terrace to the left. I can’t really remember too much about the first half, but the second half was simply exhilarating, Cup football at its absolute best. As I recall, we went ahead through an own goal before Ramage (?) pegged us back after we’d failed to clear. We then went ahead with Walker’s swiveled half-volley from a corner, before the third goal by Cross, made by “Yozzer” Hughes’ interception and lightening counter, meant people started to believe. Cue the proverbial kitchen sink being thrown at us with 6’ 7” Kevin Francis entering the fray. He had looked dangerous in the first game and it was inevitable he would score, the only surprise being the scuffed nature of the finish rather than a header. The remainder of the match felt like relentless Derby pressure and the last few minutes like hours with the now familiar defensive panic stations, but somehow we survived and pulled it off! This was Vale at their absolute best for me. Sure, people will point to Everton and Spurs, but we went hell for leather against a very accomplished Derby side containing Peter Shilton and Dean Saunders. Plus a young Francis, who would go on to be in thorn in our side for Stockport.

I worked in Derby at the time and I can remember all the comments from the confident Derby County fans during the day and as I was leaving work to go home and pick up the family. What a great night, and a great following day as the Derby fans sat very quiet near to me.