Major boost for Port Vale after captain extends his contract

Port Vale have been handed a major boost by the news that captain and player of the year Tom Conlon has agreed a contract extension.

Despite the club’s inconsistent 2020-21 campaign, Conlon himself was in outstanding form, hitting ten goals and sweeping the board at the club’s player of the year awards. The midfielder was only under contract for another year which led some fans to worry that other clubs may come in for him. Therefore the news that he has extended his stay in Burslem will be greeted with relief by many.

It marks a meteoric rise for a player who originally joined the club as a relatively unsung trialist back in 2018 before being offered a deal by then manager Neil Aspin.

Port Vale Football Club is delighted to announce that midfielder Tom Conlon has signed a contract extension, which will see him stay with the Valiants until 2024.

This new deal comes after a standout personal season for the midfielder which saw him score 10 goals and deliver eight assists during the 2021/22 SkyBet League 2 season. 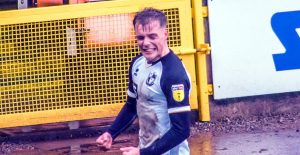