Rob Fielding Features, Who are yer 0

Popular OVF moderator Fosse69 answers our questions about Port Vale, OVF and himself. A clue… his favourite player of recent years is pictured at the top… 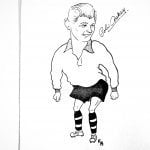 Fosse69 also known as Den, aged 83, located in a village midway between Coventry and Leicester. His avatar is on the right…

Any interests away from Port Vale?

Apart from the family, travelling and dining out which are all curtailed at present… detective novels and a casual interest in languages.

Tell us something about you others may not know?

I was a Radio Mechanic for Armoured Vehicles during my National Service.

Your connection with OVF

How long have you been on OVF?

January 2010 I did try before but the gate was shut.

How and why did you pick your username?

Fosse is the local Roman road, Leicester City`s first name, and in the last twenty years a retail park on J21 of the M1. 69 is the year I moved from Brum to Leicestershire

Who are your favourite OVF posters and why?

The popularity table does not lie… Jacko51, lots of info and sound comment on football.

Port Vale over the years

When did you start supporting Port Vale and why?

I started watching Vale as a little lad in Hanley, I used to walk up the hill, everywhere was a hill, with my Dad. Vale were the local team, his team, it is in the blood. The 47/48 season is my earliest memory, but I had been before then. 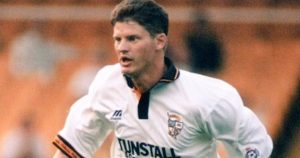 Who is your favourite all-time Valiants player and why?

It’s hard to choose over such a period. Early favourites were Ronnie Allen and Bill McGarry, both players who went on to play for England, and both managed Wolves amongst other teams but sadly not the Vale. However, “Nobbie” Steele did us alright in that era. In later years Ray “Bendy Pass” Walker stood out for me.

What was your all-time favourite Vale game and why?

My favourite game, although not the best or most important, was FA Cup win in 92/3 beating Stoke 3-1. It was a fantastic performance and the first time we had beaten them in the FA Cup. It was the first time I had seen us beat them since I missed the 1-0 League game in 55 due to National Service.

Where would you normally sit in the stadium?

I normally sit in the Railway Paddock, where I used to stand. When I could afford the extra 6d or so I’d go to the Hamil or the Bycars if it was very wet.

Your current favourite player and why?

Scott Brown. He’s consistent, more than capable and many a point is down to him.

Where will Vale finish this season?

Thanks to Fosse69 for answering our questions. If you are on the OVF forum and want to be featured on here then just click here and drop Rob an email.