Here’s a highly entertaining game from Carrow Road which took place during the 1998-99 season. There’s goals galore from both sides…

Taking place in the 1998-99 season, Brian Horton had taken over as Port Vale manager from John Rudge. After an awful run of five straight defeats, Horton had turned things around with two wins in the last four games – but could the side make it three wins out of five with victory at Carrow Road? Horton’s Port Vale side contained the likes of Marcus Bent, Craig Russell, Anthony Gardner and Ian Bogie. 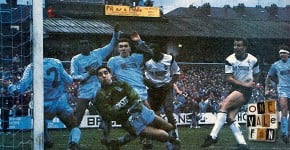 We now have nearly 150 classic Port Vale videos on our channel. Clips range from rare footage of striker Wilf Kirkham to highlights of cup giantkillings such as the wins over Derby County, Southampton and Spurs. We also have a collection of the full 90 minutes of vintage Vale games. Please subscribe to our YouTube channel and you’ll be updated whenever the channel has more content added.  It’s simple just click on the red button below: