Port Vale manager John Askey says he will be “looking for another couple up front” if Mark Cullen agrees to stay with the club.

Veteran Tom Pope is the only central forward to be under contract for next season but Cullen, who joined in the summer of 2019, is widely expected to agree a new contract.

We are just looking for another couple up front…

If Cullen stays, Askey will be looking to replace departed duo Richie Bennett and Jordan Archer. Bennett left for Stockport County just before the premature end to the season while Archer was one of six players to be released.

Askey told the Sentinel newspaper: “We know Mark can play at this level and, if we hadn’t looked to re-sign him, we would have just been left with Tom. We would then have needed another three centre forwards. We don’t want to leave ourselves short so I felt it was important we keep Mark, because he has got quality. That means we are just looking for another couple up front.”

Cullen could be the first of seven out of contract players offered new deals by Vale to agree a new contract. The 28 year-old has been a success in his first season at Vale Park netting eight times in 25 appearances. 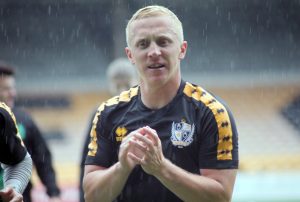