Fans at Thursday’s Port Vale Supporters Club meeting voted to fundraise for the completion of the stand’s concourse.

Following the Supporters Club Meeting last night, the fundraising page for the Lorne Street Stand concourse completion is now up & going. All donations welcome so spread the word. https://t.co/wMaxPZj0wp#StandTogether 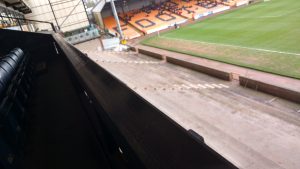 The club announced that popstar Robbie Williams would be playing a charity concert during the summer. However, to meet safety requirements for the gig, the club are planning on installing seats into the unfinished half of the stand.

Unfortunately, it would cost a further £100,000 to renovate the concourse area so that the stand could be used next season. Without an operational concourse (with exits, a food bar and toilets etc) the new seats would be unable to be used during the Football League season.

With the club’s owners having other spending priorities, the Supporters Club have launched this appeal to raise the £100,000 which would finally complete the stand. The Lorne Street stand has been incomplete for 22 years and it would be a huge boost to see the stand fully open.