Port Vale defender is ruled out for rest of the year?

22 year-old Crookes was a regular starter until the injury but he has been missing since the 19th October. Crookes suffered a training ground injury which at the time Askey described as “nothing really. He’s trapped a ball in training and he’s got a problem now with his thigh muscle.”

They are long term and the main thing is , when they do come back they are right…

Initially Askey said that “he could be out for a few of weeks” but this latest news suggests that Crookes could now miss most if not all of the remaining 2019 fixtures.

Speaking at a press conference, manager John Askey said: “Manny is going to be January and we are hoping Crooksy will be a little bit before. They are long term and the main thing is , when they do come back they are right. That has not been the case for Manny this season but we are just hoping now he’s had an operation that he is going to sort the injury situation out and he is going to be ready to go for the back end of the season.”

Converted winger Cristian Montano has been first-choice left-back since Crookes was injured although versatile Callum Evans can also play on the left too. 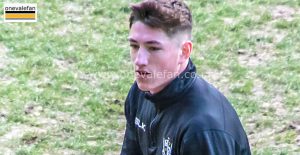