Grainger has published his autobiography “The Singing Winger” containing his thoughts on his spells for Port Vale, Sheffield United, Sunderland, Leeds and England, for whom he won seven caps.

I wondered what Roy Sproson was doing there. Here was a player of First Division standard who seemed to have ended up in the wrong context, like a larger-than-life actor who only performed in low-budget dramas in off-Broadway theatres in New York. Having played in every position except for goalkeeper, Sproson had already been with Port Vale for eleven years when I arrived and he still had another decade to go. At the dawn of the 60s, he had distinguished himself at left-back, with a sweet left foot, which meant that he and I would need to create a good understanding. It did not take long against Torquay for me to realise that Sproson had a great football brain. Well aware of my need to be in possession, he would tell me to drop off deep to ensure he could give me the ball as often as possible. He was as important to Port Vale as Jimmy Hagan had been during my Sheffield United days and as Ernie Taylor had been during my Sunderland days.

Extract from “The Swinging Winger” by Colin Grainger with Hyder Jawad 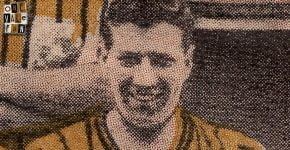 Who was Colin Grainger?

Known as ‘The Singing Winger’ for his ability both out wide on a football field and centre stage at a concert hall, Colin Grainger joined Port Vale in 1961 and spent three years in Burslem. The first season the club narrowly missed out on promotion as Grainger scored seven times from the wing. In total the former England International made fifty appearances for the Valiants, scoring eight times.

We would like to thank deCoubertin books for providing us with a pre-release copy of Colin Grainger’s book.

Please share this on:
Port Vale loanwatch: Hurst helps Bradford PA turn around poor form Port Vale Fan Viewpoint: With a bit of fine tuning we could actually achieve something

This is the OVF viewers all-time Port Vale XI