A look back at a still memorable FA Cup game for Port Vale.

Despite spending most of their existence in the lower reaches of the Football League, Port Vale can boast about having a memorable FA Cup history.

Former semi-finalists in England’s most famous knock-out competition, Vale have also reached the last 16 on six occasions since 1954 – which is pretty good for a club of their stature.

One such season was 1987/88, when they beat one of the FA Cup’s most prolific winners en route to the fifth round.

At the time they were playing in the third tier of the English game, with John Rudge as their manager. Vale had started the season well and, after six games, briefly topped the table following a 4-1 home victory over Southend United on September 14. 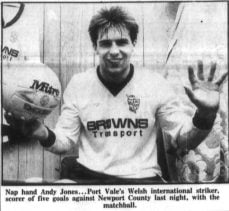 But, during September they sold star striker, Andy Jones (right), to Charlton. Jones had netted four times in the opening match of the season, while adding other goals in games four and five, before heading to south London.

However, they remained in the hunt for promotion until late October, before a dreadful run of no wins from 12 games – which yielded just four points – saw the Valiants tumble down the table to 19th – just two places above the relegation zone.

Yet, from this tricky position, they somehow managed to put together their best FA Cup run in years.

After edging past Tranmere Rovers following a replay in round one, they overcame Notts County in early December to book their place in the third round. In the first week of January 1988, they faced non-league Macclesfield Town who back then were competing in the Northern Premier League.

A slender one-goal triumph at Vale Park set up what would turn out to be a famous fourth-round tie against Tottenham Hotspur who, in the previous season, had been beaten in the Wembley final by Coventry City.

TV pundit, Jimmy Greaves, a former Tottenham player, famously said: “The only trouble Spurs will have at Port Vale, is finding the place.” 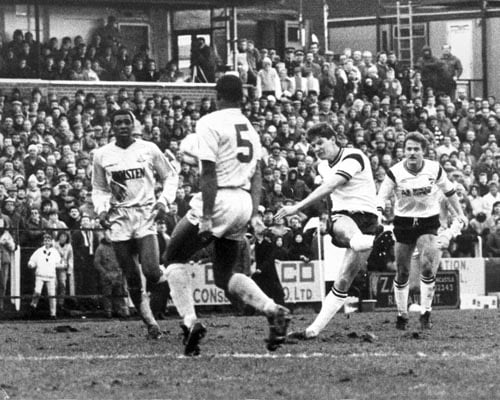 Ray Walker (right) curled a brilliant opener from 25 yards before Phil Sproson added a decisive second goal. Vale received £80,000 for the game from the BBC, with the match also broadcast live on radio in Australia.

In round five, they enjoyed a fourth consecutive home-tie, this time against top-tier Watford who played out a goalless draw at Vale Park before winning 2-0 at Vicarage Road in the replay. Vale’s cup dream was over.

As for the current season, Vale will discover their first-round opponents on October 21 and begin their FA Cup campaign over the weekend of November 9-10.

FA Cup betting for 2019/20 does not give John Askey’s squad much chance of reaching the last 16, with holders Manchester City the clear favourites with bet365 at 10/3.

Back in 1988, Vale collected around £170k for their cup-run, which obviously inspired a turnaround in league form between mid-January and early April. During this period, they lost just once in 12 league matches, raced up to 10th in the table and finished the campaign in 11th spot.

It was certainly a memorable season for Vale fans who, 12 months later, celebrated as Rudge’s team earned promotion to the old Second Division via the play-offs. Great memories indeed from more than 30 years ago.