Ahead of Port Vale’s next fixture, we take a look at players who have appeared for both Port Vale and Northampton Town. 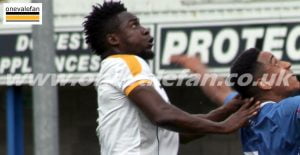 The Valiants will meet up again with central midfielder Chris Lines, (above) who joined Northampton Town in the summer. Now in the veteran stage of his career the 33 year-old joins Town after a four year spell with Bristol Rovers, his second spell with the West Country club. Lines joined Vale in 2013 following the club’s promotion to League One and made seventy one appearances, scoring four times. After being loaned to Bristol Rovers in 2015, he joined Rovers on a permanent basis in the summer of 2015.

However, former Port Vale forward Marc Richards was one of a number of players to be released by Northampton at the end of last season and therefore will not face his previous club. Meanwhile, Port Vale midfielder Manny Oyeleke (right) will take on a club where he had a brief loan spell. Oyeleke had a one month loan in January 2013 when he maade just two appearances for Town.

Set to place a bet?

Are you interested in gambling in USA. We know that it can be a hassle to look for the best online gambling sites, so why not click on the link for the top-rated gambling sites.

Going back a little further in history, John Rudge signing Bradley Sandeman began his career at Northampton while left-back Darren Hughes had a loan spell with Town during his Vale career. Even further back, other players to appear for both sides include inside forwards Willie Page and Alf Dickinson, inside-left Arthur Ford and centre-forward Joe Dixon.