The talk is all about trialists at Vale Park right now, but how did last season’s trial players get on? 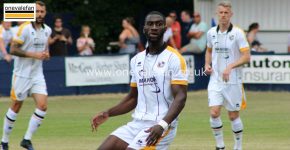 The powerful striker (pictured right) played for Vale in their friendly with Kidsgrove but wasn’t taken on. He has moved twice in the meantime. He began the season at AFC Fylde where he scored four goals in just six starts. In December he moved on to Sutton United where he managed a further four goals in eighteen starts.

The left-back (pictured top) joined Port Vale on trial in the summer and did well enough that manager Neil Aspin commented “he gave a good account of himself” but the Vale boss ultimately decided to strengthen in other areas and the former Northern Ireland U21 International wasn’t taken on. McKeown moved to Greenock Morton where he made sixteen appearances.

The locally born midfielder was released by Stevenage and did enough while on trial to earn a one-year contract with the Valiants. He was injured at the start of the season but recovered to make 34 appearances and score three goals. That was enough to earn a further year’s extension on his contract.