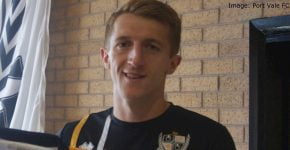 The last player to have connections with both clubs was towering defender Tom Anderson (right) who came on loan from Burnley in August 2017. Anderson played half a season for Vale before his loan was cut short to allow him to join Doncaster Rovers.

Other players with connections with both clubs include:

Winger Chris Eagles, who played for Vale during the dreadful 2016-17 relegation season. Eagles had a far more enjoyable three year spell with Burnley from 2008 to 2011.