Port Vale reserve goalkeeper Sam Hornby has rejected a contract offer from Port Vale in favour of a move to Bradford City.

Hornby was highly-regarded by the Valiants who saw him as a long-term successor to Scott Brown. 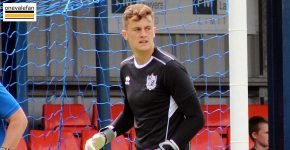 Goalkeeper Sam Hornby was signed in the summer of 2017 by former manager Michael Brown, initially as a back-up to Rob Lainton. However, Lainton was injured early on and Hornby was thrust into first-team action earlier than planned. After Hornby conceded six goals in two games, Brown told the media that Hornby had been thrown “in the deep end” and he was rested after Brown moved into the loan market.

After a loan spell with Chester, the youngster bounced back in some style, coming on for Ryan Brown in the heat of a match against local rivals Crewe and impressing with a series of good saves. His performance was enough for him to stay as number one for the remainder of the season.

In 2018, Brown’s successor, Neil Aspin brought in the experienced Scott Brown and the veteran was an ever-present in the League winning the club’s player of the year award. However, Hornby continued to impress in Reserve team and Checkatrade games throughout 2018-19 doing enough to earn a new contract offer from the Valiants.

The Bantams have completed their third signing of the summer, adding 24-year-old Sam Hornby to their goalkeeping ranks.

The former Port Vale stopper has penned a two-year contract, keeping him at the Northern Commercials Stadium until at least the end of the 2020/21 season.

Hornby began his professional career at Burton Albion – where he worked alongside former Bantam Jon McLaughlin – prior to spending the previous couple of campaigns at Vale Park.

The 6ft 3ins keeper said: “I am delighted to be here. When I first found out about the interest, it was a no-brainer to be joining a club of this size.

“This is probably the best move I could have asked for. I am at the stage of my career where I wanted a move to a big club to really kick on.

“The supporters here back the club in huge numbers, which is something that really excites me.

“Hopefully, the fans can get behind us and really push us up the table – back to where Bradford City belongs.”

Bantams manager Gary Bowyer is pleased to have added Hornby to his squad, with the start of pre-season training less than four weeks away.

The City boss added: “Sam is a great size and will add some real height between the sticks.

“While doing my homework on him, everyone I spoke to told me to sign him immediately.

“At 24 years old, he is at a good age to really progress his career.

“I was encouraged when he said he would not come in to be a number-two. He is ready to play games.”

Hornby’s signing is subject to the standard EFL and FA clearances.