Prediction panel: how will Port Vale fare against Exeter City?

After a brief hiatus our prediction panel feature returns. Each week father and son duo Rob and Fred will pit their wits against a succession of OVF forum regulars. 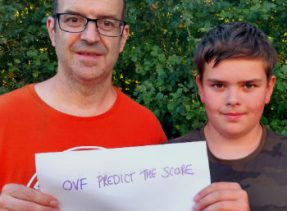 Rob founded OVF over twenty years ago and updates the blog on this site.  Rob says he is an “absolutely hopeless” predictor. His son Fred is 13 and has been going to see Vale for a few years now. He says that he hopes to “humiliate my dad as per usual.”

Port Vale 2-0 Exeter City
I can see the Vale building on their recent good form especially after breaking their long away hoodoo at last. The team selection is looking to be more and more straightforward and the only thing we’re really missing is for the Miller and Pope partnership to kick on.

With that in mind, I’m going for an excellent home victory with both strikers finding the target. Impressive veteran Leon Legge will then ensure the Vale keep a cleansheet at the other end.

Port Vale 1-0 Exeter City
I think Tom Pope is due another goal and help stretch his lead as Vale Park’s record goalscorer. I know Exeter have been doing well recently but I think Port Vale are so strong at home that a Vale win will happen.

This week the duo take on the forum regular valefan16…

I’m Jamie Brooks, 33 from Leicestershire. I started following the Valiants in the mid ’90s as I didn’t like following the local crowd with Leicester or Forest and saw the Vale on TV when they used to be on a few times a season on a Sunday. I liked the kit or the name… who knows… but I saddled myself with it and been on the journey ever since! I’ve been on OVF for years… probably around 2001 or 2002. It helped me keep in the loop when following the side as no one local to me followed the Vale! It’s been a nice week for me anyway… I’m sixty miles away from the two clubs and my sister in law’s fella is a Crewe fan!!

Port Vale 1-0 Exeter City
I think it will be like one of the games against the top teams at home last year, I.e. Lincoln/Coventry, think we will play well and take a chance and the keep it tight, defensively we look much improved since Newport. Legge will be key against Stockley and if they play Forte who is decent in the air and we need Manny to be on it to dominate that midfield. Been really impressed with Hannant this season too, really stepping up.

We’ve just got to be solid at the back and keep possession. This is the toughest game this season but fact remains we’ve only lost four league games at home in 2018… one a dead rubber, two games where we battered the opposition but got hit with a sucker punch (Exeter and Newport) and the other with a horrific refereeing performance (Crawley) so it’s key after our first away win this year not to let the home form tail off. This game will give a good indication of how far improved we actually are.