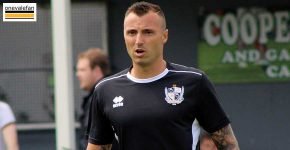 Midfielder Anthony Kay (right) is suspended for this game so his place will probably go to one of Billy Reeves, Michael Tonge or Chris Regis.

“It might not have been the prettiest performance , but winning is the main thing and hopefully we can repeat that on Tuesday. We came out on top and we deserved the points we earned, but hopefully next time out we’ll add a bit more quality and maybe find a few more goals…”

The Scotsman certainly divides opinion and will almost certainly not be the most popular figure on the Vale Park sidelines this season. Convicted of tax evasion while Boston manager the 55 year-old is in charge of his sixth club. 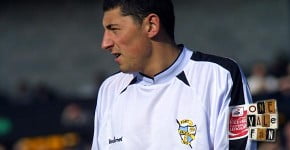 The last time the two sides met at Vale Park was a Football League Trophy clash in 2016 which the Valiants lost 1-0. The last league clash at Vale Park was in 2002 when Vale won 4-2 thanks to goals from Micky Cummins (2), Ian Armstrong and Billy Paynter (right).

There are a couple of former Valiants in the Mansfield ranks in former loanees Krystian Pearce and Will Atkinson.