Expectations are high – can Aspin’s revitalised Vale side make it four victories on the trot?

Swindon fans… there is parking available a five minute walk away from the stadium at Haywood Academy ST6 7AB. Cost is just £3 per car.

Vale will be missing the injured Ben Whitfield with Cristian Montano (right) favourite among the media to replace him. However, it’s no cut and dried deal – other options include bringing Tyler Denton or Michael Tonge back into the midfield. Vale are expected to be otherwise unchanged.

Swindon could be without Luke Norris. The influential striker, who has scored eight goals in 15 appearances this term, missed last week’s win at Wycombe with a long-standing shoulder injury

“If they work hard but don’t get the result they won’t get criticised by me but the minimum I expect is that they put in a shift. If they do that week in, week out they will pick up points…”

The former Bury boss is in charge of his third club after joining Swindon in the summer. The former defender started his managerial career at Barnsley before a three year stint with Bury. He has now been in charge of over 200 games as a manager.

The last time we played Swindon at home was last season when it ended in a thrilling 3-2 win for the Valiants. On the scoresheet that day were Chris Eagles plus JJ Hooper with a double. The video from the game is below: 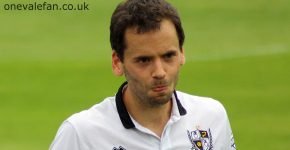 Ben Purkiss (right) is expected to line-up at right-back as he returns to Vale Park for the first time since his summer move. Another ex-Valiant in the line-up could be former centre-half Chris Robertson. Vale’s Cristian Montano could also feature against a side for whom he had a spell on loan.