A collection of Port Vale hard men from yesteryear 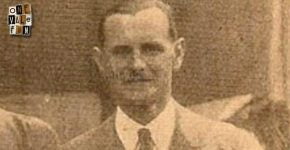 Also a Vale player-manager, Holford was known as ‘Dirty Tommy’ for his reckless challenges, but as his revolvy.com profile observes the fearsome Tommy was also recognised as “an excellent passer of the ball”. You could perhaps imagine him as a latter-day Paul Scholes, kicking chunks out of opposing centre-halves brave enough to turn out for the likes of South Shields, Clapton Orient and The Wednesday, before he made an incisive through-ball or 20-yard half-volley to seal another famous Vale victory. 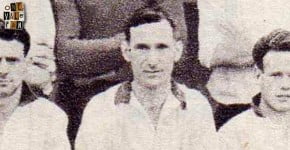 If you want a character reference for your toughness then you can’t go far wrong with a word or two from Vale legend Roy Sproson. Talking about Tommy, Roy said “Pound for pound, in fact, I would say Tom is the hardest man I have ever met.” That’s some statement and enough to put Tommy right on our list. However, the centre-half also had the scars and experience to back it up. While modern players may prepare for a footballing career by training hard in the gym Tom was a soldier in World War Two and was injured by a grenade to boot. He also picked up 22 stitches in his head from various footballing clashes. 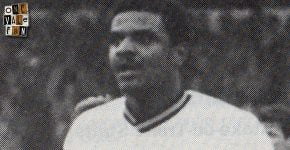 In the famous 1988 Spurs FA Cup upset, Clive Allen was playing for Spurs. After a hefty challenge Allen landed next to Vale defender Hazell. The burly defender loomed over the England International and told him “You’re going to get that for the next eighty-five minutes.” According to team mate Phil Sproson, Allen went “as white as a sheet and hardly had a kick of the ball” for the rest of the game. Now that’s some reputation but there’s more… Sproson also tells how Vale played a night match against Doncaster and one of the players racially abused Hazell. Bob said “Right, I’m going to have you” A few minutes later, he slapped Bob across the face and Bob stopped playing and proceeded to chase him down the wing. Eventually Paul Smith managed to stop him. “I’ve never seen him run so fast, I’ve never seen anything like it” commented Sproson. 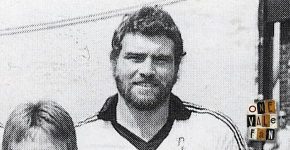 The bearded forward already had a fearsome reputation before joining Vale. He had been sacked by Everton for a training ground punch-up. Earlier in his career he somehow managed to head the foot of an opponent and break their toe. Bruised and unbowed Bernie played on. He joined Vale in the late seventies and a hat-trick against Crewe (current team take note) endeared him to the Vale crowd and he rapidly became a cult hero as much for his intimidating presence as for his goalscoring prowess. 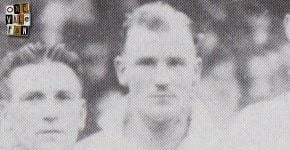 Locally-born defender Harry showed how the old school coped with injury… He collided badly with the railings during a game against Crewe and badly cut his head. However, the following week, with five stitches still in the wound, he returned to action wearing a black beret as “protection”. That’s the mark of a true hard man. 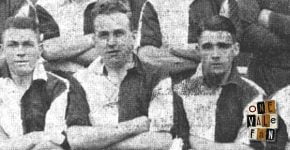 One of OVF Towers favourite cult heroes, Jack (or “Nipper” as he was known) was a world away from the pampered stars of today. Signed from non-league Roberts (pictured on the right of the photo) combined playing football with a career in baseball. He scored goals for fun (sixty in a hundred games for Vale) but the true measure of the man came away from the football pitch. In 1939, he left the club to enrol in the Irish Guards and fight in WW2. Captured and put in a prison camp in Tunisia, Jack escaped and walked FOUR HUNDRED MILES to freedom across the desert with a BROKEN BONE in his neck. What a bloke!

If you have any tales of Vale hard men of yesteryear which you’d like to share please join in the debate on this forum thread.

A look through the OVF archives: the Iron Curtain side pictured at home…