Chris Eagles scored his first Vale goal as the Valiants picked up a potentially priceless away point against Southend United.

Michael Brown was forced into one change with Kiko injured and Scott Tanser drafted in as left-back.

Experienced striker Simon Cox should have given the home side the lead within the first 15 minutes but he somehow missed the target. On the half-hour mark, Vale finally mounted a spell of pressure with Smith and Foley both having headers cleared off the line. However, the Valiants were dealt a blow just before half-time when Thomas was forced off injured and replaced by Sam Kelly. 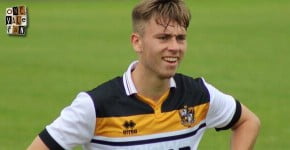 Moments into the second-half Vale suffered another injury blow as Danny Pugh limped off and Billy Reeves (right) was brought on for his senior debut. Vale continued to have chances with Anton Forrester and Reeves both having efforts.

Both sides had chances as the game drew to a close but it was Vale who made the decisive break as Foley’s free-kick found Eagles who headed home with twelve minutes left on the clock.

After the goal, Vale were reduced to rearguard action and it saw some excellent defending with Nathan Smith and sub Billy Reeves prominent throughout. With five minutes left, Scott Tanser cleared off the line as the home side pressed but moments later it was Anthony Wordsworth who equalised from close range.

In a dramatic ending, sub Dan Turner went close as Vale rallied in the dying minutes. However, despite five minutes of injury time, neither side could force a winner as it ended in a draw.

Despite the mounting injury list, Michael Brown will be thrilled to have picked up a valuable away point which may just move his side closer to safety.

The Port Vale programme two months out of date, 1984

Where have Vale’s released and listed players ended up?