It’s a quid to get in and a vital game as Vale travel to Rochdale on Tuesday evening. Here’s our brief guide…

It’s just one pound to get in on Tuesday night. If you want to find out more about this excellent offer then please visit this link

“It will be another tough game. They are going well. We know it is going to be a tough week. We need to see how to manage some of these players with two games in three days, so of the players find that hard. We will be looking to the squad to see who will be ready…” 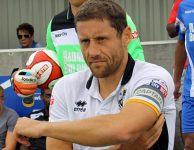 The Sentinel is hinting that Vale may make changes due to the brief time between the Bradford and Rochdale games. The likes of Jerome Thomas, Anton Forrester and Sam Foley will have to be carefully managed due to their injury records and Michael Brown (right) could well rotate his squad. It may even be a game for the manager himself to don the boots.

Defender Nathan Smith was named man of the match by match sponsors onevalefan.co.uk after his heaader proved to be the winner in a 1-0 win for Port Vale.

Former Valiant Calvin Andrew could face his former club but former Dale player Scott Tanser may remain on the sidelines for this game. Other players to appear for both sides include: