Ian Marsden: age is no barrier…

In conjunction with our support of Masters of Art and Sport, we spoke to inspirational paralympic athlete Ian Marsden who hails from Trentham.

Why are we running this series?

As part of our support of the Masters of Art and Sport exhibition we wanted to take a look at two inspirational figures from each discipline. We’ll be talking to a leading artist soon but first a word with Paralympic Ian Marsden.

Age is no barrier. It took me thirty years… I’ve never given in…

Potteries-based paralympic athlete Ian Marsden is a firm believer that Stoke-on-Trent is a hotbed of sporting talent. “It’s not a big place but there have been a lot of medals,” he tells me. “Lots of activities go on.”

Marsden travelled to the Rio Paralympics in 2016 and picked up a deserved medal in the paracanoe K1 200m. “Rio was a special place,” he recalls. “Everyone was very nice and it all went very smoothly.” Ian was particularly fond of where he was located commenting that the “venue was iconic and next to the Christ the Redeemer statue.”

A great place to win a medal then and Marsden has plans for even more. “2020 is the target and I’ll hopefully work towards Tokyo. But first there’s the World Championships and I’ll take it one year at a time.”

It’s a tribute to Marsden’s dedication that he indeed never gave in but he urges youngsters to take up sport at a young age saying “you may regret it if you don’t do it when you’re younger. When you’re young you could be spotted and then funding is available. There are lots of grants around for talented people.” But he adds, you still need “dedication and talent.”

Ian is clearly a driven man and has been awarded several leading Staffordshire sportsman awards. He was therefore a great choice to be named as an ambassador for the Masters of Art and Sport exhibition. “It puts Stoke-on-Trent on the map,” he adds. “by combining sport and art you may inspire people to look at something you may not have looked and before and that may inspire people.”

It may do but Ian needs to have no worries on that score. He’s already an inspiration for lots of us. 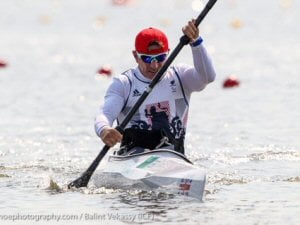 In 2016, Trentham’s Ian Marsden won bronze in the Paralympics K1 200m paracanoe – and was close to taking gold after being involved in a three-way photo-finish in a thrilling race. The 44 year old smashed his personal best and was the oldest competitor in the final.

Ian was a world champion powerlifter until he suffered a serious spinal injury and became wheelchair bound. He then became a member of the 2010 Team GB Paralympic shooting team; representing GB several times and winning an individual silver and team bronze in the IPC World Cup. Ian then switched sports to become a member of the Paracanoe GB sprint team; winning silver at the 2013 Europeans 200m sprint, and in the same year silver at the World Championships. He also won gold at the European Championships in 2014 and silver at the World Championships in 2015.

Ian is an ambassador for the Masters of Art and Sport exhibition.

You can find out more about Ian’s achievements at ianmarsden.com or follow him on Twitter at @ianmarsdengb