EXCLUSIVE: The Vale Vaults exhibition has resulted in the discovery of an 1886-87 Port Vale “subscriber’s” ticket – described by historian Jeff Kent as the second oldest Vale artifact he has seen.

The exhibition took place on the 25th and 26th of October and during the Saturday exhibition, curator Rob Fielding was approached by a gentleman carrying a small envelope and he handed over the item. Rob offered to take his details to return the item, but the man said that Rob could keep it. 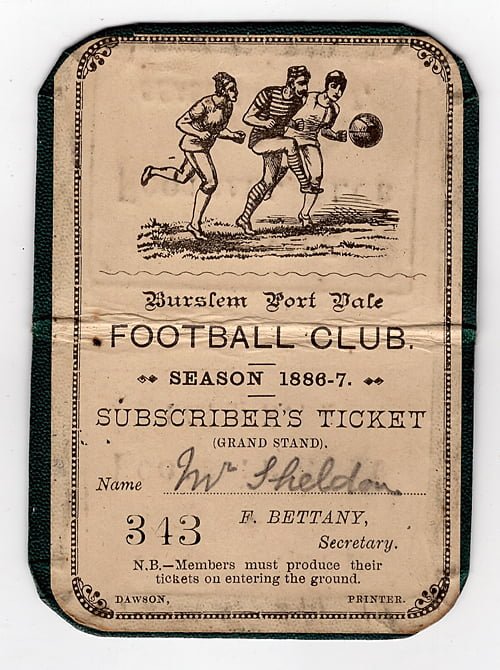 The ticket is numbered 343

The item turned out to be an 1886-87 “subscriber’s” ticket and was examined by well-known Vale historian Jeff Kent.

“  I’ve seen only two items earlier than your old season ticket and one of those is probably bogus!

Kent told OVF: “If you discount period publications (for example, the Sentinels and football annuals), then I’ve seen only two items earlier than your old season ticket and one of those is probably bogus!

“The earliest is a photo of a team of lads, purported to be Vale in 1881-82, but the evidence shows that it wasn’t the first team and I’ve serious doubts as to whether it’s Vale in any connection. The earliest which seems genuine is a team photo of 1883. The third (or perhaps second) oldest is your ticket.”

The season ticket would have been produced only seven years from the club’s foundation because, as Kent explains, it’s most probably that the club was founded in 1879, not in 1876. He told us: “1879 is the red-hot favourite in relation to the foundation of the original Port Vale club. The vast majority of the evidence points to it and the case for 1876 is very weak. Since I published The Valiants’ Years book in 1990, I have uncovered further evidence in favour of 1879, which I’ll include in my forthcoming Vale history book, and no-one has has produced any further evidence in favour of 1876. I don’t think that any formation date will be 100% certain, but the case for 1879 is very strong.”

The writer was delighted to be able to view the item adding: “Without doubt, your exhibition was the catalyst for it coming to light at this stage and, hopefully, being saved permanently for posterity.” 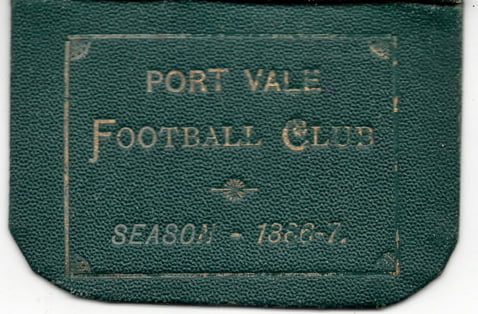 The back of the ticket is bound in green leather

Jeff Kent is currently writing a new Port Vale history book while copies of his latest work “What if there was no Port in the Vale?” are still available. Please contact Rob Fielding if you are interested in obtaining a copy.