Derby County 2-3 Port Vale: one of the Valiants’ finest cup performances away from home as they defeat First Division Derby County at the Baseball Ground. 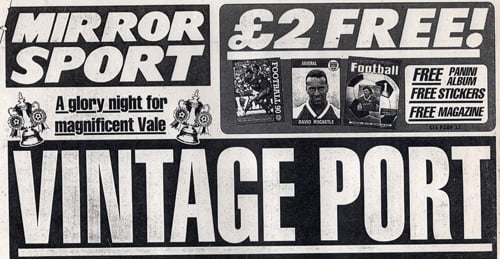 Port Vale recorded another famous FA Cup victory under the managership of John Rudge as they defeated top flight Derby County in a pulsating replay.

The first leg, at Vale Park, had finished 1-1 after forward Darren Beckford’s strike had beaten legendary keeper Peter Shilton. But in the replay, the Port Vale side went one better.

However, in front of a crowd of 21,389 at the Baseball ground the Valiants recorded perhaps one of their finest cup performances under John Rudge.

Port Vale’s goals were scored by Derby defender Rob Hindmarch (an own-goal), a close-range strike by midfielder Ray Walker and a stunning break away strike from striker Nicky Cross, who capitalised on a surging run from left-back Darren Hughes.

It was a memorable strike to seal a fantastic away performance and send the Valiants into the next round of the FA Cup.

Our YouTube channel contains the full ninety minutes of this classic Port Vale game. Watch it below: