Supporters Club: We'll remove the board 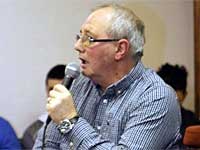 The Supporters Club have issued a statement following Tuesday’s open meeting. Chairman Pete Williams also reassures all fans that: “irrespective of what happens in the coming weeks, the Supporters’ Club is committed to removing Messrs Lloyd, Deakin, Oliver and Miller.”

Fans were given the opportunity to meet candidates put up for an interim board by Port Vale Supporters’ Club at a meeting held last night at Smallthorne Victory WMC.

There was standing room only again as five of the six candidates who will be put up for election to the Port Vale board at the forthcoming Extraordinary General Meeting (EGM), along with the Supporters’ Club’s solicitor, introduced themselves and were quizzed by more than 250 fans and shareholders.

Port Vale Supporters’ Club has called the EGM to remove the club’s four directors – Mike Lloyd, Peter Miller, Glenn Oliver and Perry Deakin – in the light of the collapse of the Blue Sky investment deal, the issuing of nil-paid shares, the mortgaging of Vale Park and the numerous examples of the board misleading and failing Vale’s fans and shareholders.

The Supporters’ Club intends to institute an interim board at the EGM which will deliver much-needed transparency by examining the club’s finances; liaising with creditors and where appropriate taking independent professional advice to try to secure the future of Port Vale after many months of failure and uncertainty caused by the current board.

Port Vale Supporters’ Club chairman Pete Williams, himself a candidate for the interim board, said: “It was a very important meeting We had promised that our candidates would be presented to the fans and, unlike the current Vale board, we intend to honour our promises.

“It was an emotional night and it was quite clear that everyone in the room – including the interim board candidates – felt very passionately that Port Vale must be rescued from the current regime.

“There is, understandably, a lot of anxiety and much speculation about what the board’s next move will be and what will happen at the EGM.

“I’d just like to ask fans to bear in mind two things: Firstly, the Supporters’ Club committee and its many allies are working extremely hard behind the scenes to remove the current board. Secondly, I want fans to rest assured that irrespective of what happens in the coming weeks, the Supporters’ Club is committed to removing Messrs Lloyd, Deakin, Oliver and Miller .

Along with Mr Williams, fellow board candidates Mike Thompstone, Paul Humphreys, Margaret Sinstadt and Nick Regnauld were all present at last night’s meeting. The sixth candidate – Lyn Rowe – was unable to attend due to a prior engagement but had been present at the previous SC meeting.

The Supporters’ Club will be writing to all shareholders ahead of the EGM with information about the six candidates and is creating a special web page dedicated to the ‘interim’ board.

The SC committee would also again like to thank Black & Gold, Starve ‘Em Out and North London Valiants – along with the vast majority of ordinary fans and shareholders for their support at this difficult time and ask that they continue to work with us for the good of OUR club.

The Supporters’ Club, which now boats a membership of more than 1,200 fans, would also like to take this opportunity to wish Micky and the lads all the best for Saturday’s away trip to Northampton.

Membership of the Supporters’ Club is completely free and you can join online through this link: