This is a story of ‘truetrini’, a regular Forum member.

Trinidad born Gershwin Stephen (aka truetrini) currently lives and works in Virginia USA and is a mad keen supporter of the Trinidad & Tobago Soca Warriors. Stafford born Chris Birchall plays for Port Vale FC and Trinidad & Tobago. No, it’s not a conundrum because Chris’ grandparents migrated to the Windward Isles where his mum was born. When asked by the Trini press why he qualified to play for them he replied ‘Me mum’. This memorable response gave rise to his Soca Warrior nickname ‘Me Mum’.

We all know that the Soca Warriors qualified for the 2006 World Cup and on Tuesday February 28, at Loftus Road, the ‘Warriors lined up against Iceland in a friendly. Before that game on Saturday February 25 was the Brentford v Port Vale game at Griffin Park. Gershwin thought this the ideal opportunity to see Chris ‘Me Mum’ Birchall play for both ‘Club and country.

Gershwin’s been and gone, but what a time he’s had
Along with his three mates from the Isle of Trinidad,
And he wants us all to know whilst he’s ‘Trini 2 De Bone’
From this day fourth, until he dies, Burslem is his second home.

They called in at the New Inn, but this was not by chance,
And met up with our Birdy from the Port Vale ‘London Branch’,
Also there was Trent Vale Chris with the Burslem Caravan,
And with a welcome fit for kings they greeted Trini-man. 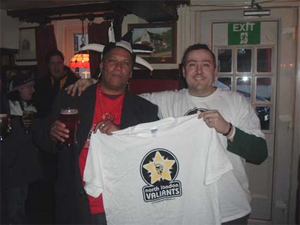 An Independent TV crew had tracked them through the day
To get a World Cup preview of the Soca Warrior Way,
But Gershwin and his mates, insisted so they tell,
That other local Valiants’ be interviewed as well.

Then Bowers of the local Beeb, a true blue Valiant man,
Introduced our Gershwin to the wider Port vale clan,
He met Bill Bratt, our Chairman – another true blue son,
And he was tickled pink when presented to ‘Me Mum’.

Before the game and after Chris Birchall gave his time
To answer Gershwin’s questions and an autograph to sign,
Then lens-man Gerard Austin a thousand words did write
With a single classic snapshot as the cold north winds did bite. 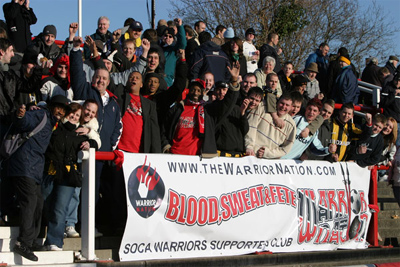 The Brentford Bees were buzzing from their latest ‘Cup success
And a win was on the cards, nothing more, nothing less,
But little did they realise a secret weapon Vale would bring
In a golden lucky quartet we call ‘de Trini Sting’

The game all done and dusted, and the Bees had lost their hum,
Another gift was given to our Windward Island son,
This time our Kidsgrove Valiant, no second thought at that,
Presented to our Gershwin his favourite Jesters hat.

They walked back to the pub for another drink or two
And then the Trini-men waved us all a fond adieu
With a promise that one day to Burslem they will come
To watch young Chris in action, and maybe meet ‘His Mum’.

The memories, the souvenirs, new friends made as well,
All of this and Gershwin’s thoughts the Sentinel did tell,
But hang about, there’s one more thing before this stories told
The Icemen and the Warriors will meet at Loftus Road.

It may have been a friendly, but folks you need to know
The game took second place to the Trini music show,
And what about those ladies in outfits meant to tease,
They were dancing at the break whilst the terraces did freeze.

Forget about the weather, forget about the game,
And we wonder ‘Will the Icemen ever be the same?’
There was dancing to loud music, ‘twas fun and so much more,
The Warriors scored two goals, the Icemen did not score.

There’s a post script for our Gershwin to bring him up to speed
To say that Caz is sorry not to meet you as agreed,
It seems the hand of fate meant that she must stay away,
But she promises, hand on heart, you’ll meet another day.