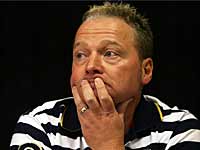 Director Mike Lloyd has controversially claimed that Peter Miller and Perry Deakin can use their nil-paid shares to vote at next month’s extraordinary general meeting.

Miller and Deakin claimed that they had bought blocks of shares in the club worth £250,000 and £100,000 respectively when they sought election to the club’s board, but it later emerged they had not invested a single penny. To date, no evidence of payment has been produced.

When asked during an interview by BBC Radio Stoke whether the nil-paid shares had now been bought, Lloyd said: “That is a legal matter so I can’t comment.”

But he added: “You can legally vote with shares whether they are paid for or not. That is 100 per cent legal under company law.

“It doesn’t seem right, but I can assure you that if a company issues nil-paid shares to you then they will have voting rights.

“But there’s an assumption that those shares have not been paid for. I can’t comment on that – but they could have been paid for.”

This view is bound to produce a hostile response from Port Vale fans who will see it as an attempt by the board to cement their own positions of authority despite nearly 98% of Port Vale fans wanting the entire board to be removed.