The Milton Keynes-based firm signed a two-year contract in July to design and produce the Vale programme until the end of the 2012/13 season and agreed to pay Vale a fee of £20,000 per season for the right to produce the programmes.

Regal Sports co-owner Peter Davies told the Sentinel: “Taking away an estimated £15,000 in advertising revenue, the club’s average gate and what other clubs sell, we felt 1,000 sales per game was a conservative target.

“But after the deal was signed, club staff told me the most programmes they had sold over the past couple of seasons was 500. 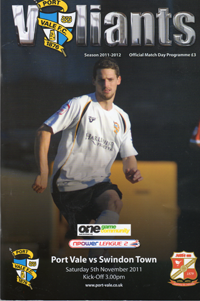 “So if you look at the numbers, the £72,000 figure is grossly misrepresentative.

“We’re losing money on production costs, added to things like the payment of sales commissions, distribution costs and potentially the full £20,000 fee.

“On top of that we also supply the club with 300 programmes free of charge.

“But we’re a positive company and we want to support a community-based club like Vale and reach an amicable solution. That’s why we’re continuing to produce the programmes.

“And if we hadn’t produced them the club would have been in breach of Football Association and Football League rules.”

Regal Sports’s solicitor sent a letter to the Vale board threatening legal action in December, but have yet to receive a response from the club. In response Regal withheld payment of their final installment which promoted a threat of legal action from Deakin.

Deakin’s letter stated: “The agreement clearly states that in the event that unit sales average less than the 1,000 per fixture, a reduced fee for 2012/13 will be agreed.

“There is absolutely no provision for you to withhold payments due to us for 2011/12.

“Please make payment to Port Vale immediately as per of our agreement.

“Failure to do so will result in legal action being taken against Regal Sports Press.”

A club spokesman told the Sentinel: “Port Vale Football Club categorically refutes the allegations made by Regal and will defend itself legally to this point.”

However, this news of heaps more pressure on Port Vale’s discredited board, who are coming under huge pressure to step down from what is clearly an untenable position.