Slaven: Autoglass was a ‘great day’

We’ve managed to catch up with former Vale striker Bernie Slaven and have a brief chat about his time at Vale. 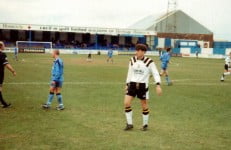 Born in 1960, Bernie joined Vale in 1993 after his release from Middlesbrough. Although in the veteran stages of his career, Slaven still managed 13 goals in 46 starts including memorable cup goals against Stockport in the Autoglass Trophy final and a winner against Southampton in the FA Cup. He left Vale in 1994 and finished his playing days with Darlington.

Firstly, we asked Bernie about his move to the Valiants and how easy it was to move to Vale Park.

Bernie’s answer was refreshing honest telling us “It wasn’t easy moving to Port Vale, as my heart still belonged in Middlesbrough. You have to remember I was being forced out by a club I had played with for just under eight years and it wasn’t through choice that I came. Having Dean Glover and Paul Kerr my ex-team mates there, did help me settle in fairly quickly though.”

After the trauma of his unwanted move, Slaven was to suffer an awful start, being sent-off on his Vale debut. What were his memories of that game? “I remember getting kicked for 45 minutes by a big hairy-arsed defender,” Slaven told us. “And early into the second half I lost control and hit him, I got my marching orders. I remember sitting in the bath and one of the subs coming in and saying we are losing. He turned out to be lying we won.”

However, that game was overshadowed by an astonishing performance over Barnet, when both Slaven and fellow striker Martin Foyle scored hat-tricks. Naturally, it is a game that Slaven remembers fondly. “I had scored hat-tricks at my previous clubs, so I was delighted to grab one for Vale,” Slaven said. “I had made it 3-0 at half time then Foyle grabbed a hat-trick. So, not a bad days work – six goals and three points and a clean sheet, what more could the fans ask for?” 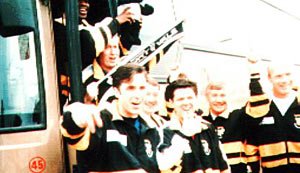 We wanted to go through two other great Slaven performances with the former striker, firstly, his winner in a FA Cup giantkilling over Southampton and then, of course, his famous winning goal in the Autoglass Trophy. Here are Slaven’s thoughts on both games.

Slaven on Southampton: “Yes, I had only made a cameo appearance down at The Dell, but in the replay I remember a great crowd and atmosphere playing against top flight opposition. I remember the ball getting swung in from the left and I clipped the underside of the ball and it went in to make it the final score 1-0.”

Slaven on the Autoglass goal: “The Autoglass final was at Wembley was a great day out for both the fans and the players and to win it was brilliant. We were the first Vale team to appear at the Twin Towers, which was great, I remember setting up the first for Paul Kerr and then grabbing a second… a great day!”

We wanted to remind Bernie that we fondly remember bumping into a group of Middlesbrough fans who had made the trip to Wembley to support all the former Boro players. Slaven was naturally proud to held in such affection.

“It’s great, even better than playing, to know that both set of supporters still remember and appreciate my efforts, for the football clubs,” Slaven told us. “To be at Vale for such a short period and to play at Wembley twice in a week and win a cup medal was brilliant.”

The former striker also had fun at the club and remembers some incidents which show how the players ahem ‘bonded’.

“I remember on away trips the players would dance up and down the coach with sun glasses on to Madness songs, Rudgie looked uncomfortable,” Slaven added. “I also remember Peter Billing turning up at my door with a greyhound. He ended up taking it to training! I also remember Swanny sticking one on me at training and I think I still have the mark to this day!”

Despite the fun and games, Slaven has the greatest respect for his manager at the club. “I enjoyed working with John Rudge, He had terrific enthusiasm for the game, he was tactically aware and was a genuine warm person,” Slaven said.

And Bernie still keeps an eye on Vale matter. “I do still keep an eye on the Vale results and always want them to do well and win,” he told us.

It was nearly the end of our brief chat, but the former striker wanted to end with a message for the fans who supported him. “Thanks for all the support you gave me when I played for you and good luck to the Vale in the future!”

Thanks to Bernie Slaven for taking the time to answer our questions.