You may not have heard of Dave McLelland, but he played for Port Vale during one of the most momentous seasons in the club’s history. 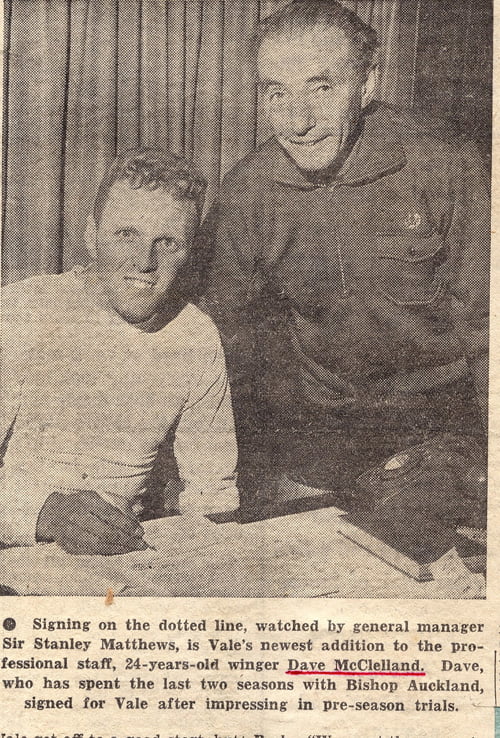 Signing up with Sir Stan
David McLelland – A Port Vale Footballer
An extract from a meeting with Dave on 16th December 2003
You may not have heard of Dave McLelland, but he played for Port Vale during one of the most momentous seasons in the club’s history. It was a season full of controversy, which nearly saw the club disappear forever.

Born in Newcastle upon Tyne on Christmas Day 1941, Dave showed much promise as a footballer from a young age.

Whilst playing local football, Dave worked in the Tyneside shipyards and had trials for several professional clubs including Wolves and Charlton (where he played a game in 1958 for their reserves against Bobby Moore, who was playing in his first season for the Hammers).

In 1967, Dave was playing for the legendary Bishop Auckland, a very big team in non-league football in the North East, and had made quite a name for himself on the North-East scene.

In 1967, interest was shown in Dave by Darlington but also by Port Vale who were picking up a lot of players from the North East at the time.

Vale’s manager was the legendary Sir Stanley Matthews who was actively promoting the youth set up at the club and the development of non-league players (no doubt the club was lacking cash as usual!). As a tricky right-winger the presence of Sir Stan no doubt helped attract Dave to the Vale.

So Dave signed professional forms with Port Vale at the age of 26. You will find a photograph of Dave signing with Sir Stan at the top of the page.

This is not the only connection that Dave has with former Vale managers for he also played alongside John McGrath. The club bought a house in Allerton Road, Trentham for Dave and he paid a weekly rent. The house cost £4000 (a lot of money at the time) and Dave paid £2 per week in rent. Incidentally, from his time in this house Dave remembers frequenting the ‘Man in Space’ pub which was at the bottom of his garden, as well as the ‘Penny Farthing Club’ and the ‘George Hotel’ in Burslem.

Sadly Dave suffered a severe knee injury pre-season which greatly restricted his opportunities at the Vale. He was to make only two starts… Exeter away (see program below) and Notts County away and appeared twice as a substitute, at Chesterfield and at home against Darlington. An all too brief a career but what would any of us give to get onto the Vale pitch in a competitive match!?!?!?
The team was struggling and Sir Stan’s policy was that, despite having brought in fresh talent, he had to go with the experienced players at this time. It is to Dave’s regret that he feels that he never got the chance to prove himself at the Vale… who knows what would have happened had he played more games?

Dave has special memories of Stan Steele, Jimmy Goodfellow (one player whom he would really like to get back in touch with), Roy Chapman (the ‘ultimate professional’ and Lee Chapman’s father) and Roy Sproson who he described as the best player that he played with. Photo 4 (below) features the 1967/68 squad with the names of as many players as Dave can remember. As usual he’s on the front row!!! 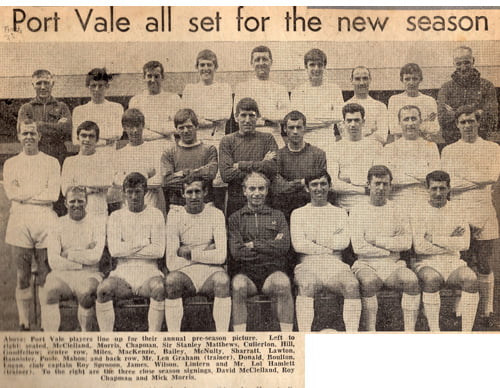 Events on the pitch that season were somewhat overshadowed by events off the pitch as Vale were accused of making illegal payments to players… specifically inducements to youngsters to sign up with the club. Vale were expelled from the league at the end of the 67/68 season but were voted back in for the start of the following season. The club that we love could so easily have disappeared for ever.

It is said that Sir Stan (who was not implicated in these events in any way) never felt quite the same after these events and drifted away from Vale and football in general. Dave describes him as “a gentleman” but “not a manager.” Perhaps Sir Stanley was just too nice a man for the job.

Dave was loaned out to Burton Albion during the season, before returning to Vale. After leaving Vale in 1968, he went to play in South Africa, enticed out there by Stan Steele (some of you may know of this man). Dave spent three years playing there and whilst out there, he trained in hotel and hospitality management.

Post football, Dave did return to the shipyards, but then moved into pub management, managing pubs in Oxford, Oldham and finally Sidmouth, Devon where he has lived for 20 years. He is a regular in my local and I hope that we remain friends for a very long time.

When I met him, he was a wonderful down to earth bloke, who clearly just loved playing football. His time at Port Vale was wonderful for him and he has very fond memories of the club (he still keeps an eye open for the club’s results and knew a lot about what is going on at the club at the moment) and the place… he described the people of Stoke on Trent as “smashing people.” His one regret is not getting more chances to prove himself at Vale Park.

One season, four games and yet so many memories of great times at Port Vale F.C.

A lucky man in my book and a pleasure to have met him.