Porter: My goal against Stoke meant a lot

We managed to catch up with Vale legend Andy Porter and have a chat about his time at Vale Park. 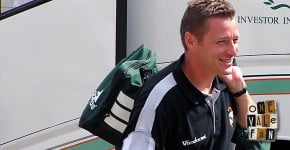 Porter had two spells as a player at the club, making over 350 league appearances. He was part of the Vale side that lifted the Autoglass Trophy at Wembley in 1993 and also went on to have a successful career as youth team coach at Vale Park.

First of all, we wanted to ask Andy about his favourite moments as a player and we suggested that goal against Stoke and the appearance at Wembley could be contenders.

“Yes, both of them!” Porter confirmed. “That goal against Stoke meant a lot. There was a lot of rivalry and it was also a left-foot shot! Seeing all the fans at Wembley was also special and the whole atmosphere that day was good.”

Andy also has some suggestions of his own telling us his other highlights were: “Taking penalties! There was a bit of pressure there but I really enjoyed it and I was also honoured to be named as captain.”

In the course of our research, we’d found that Andy is in sixth place in the club’s all-time appearance list, but he only needs six more games to reach fifth. Would he consider a third playing comeback?

“ I appreciate all your support. I always gave 100% and I think that’s why the fans liked me. I maybe didn’t have the skill but I did give it 100%…

“I’ve hung up my boots,” he laughs. “I helped Alsager out a few weeks ago. I was only supposed to play an hour but I ended up doing two ninety minute games. I am definitely past-it now!”

How about the great John Rudge and his influence on Porter’s career?

“Port Vale played Man City when I was a schoolboy. Rudgie remembered me and when I was released he called me up and took me on. Early on, I thought he subbed me too much but eventually he gave me more and more responsibility. When he made me captain, that was great.

“He didn’t want me to go to Wigan but if I hadn’t have gone then, I would never have gone. And when I went, after thirteen years of one manager at Vale, my manager at Wigan had gone within a fortnight!”

Porter is also quick to praise Vale’s coaching staff for their help.

“I had some good coaches. Alan Oakes was strict as was Mike Pejic. When I joined the first-team, Pejic moved to first-team coach too. I was initially, like, ‘Oh no!’ as he was very strict. But “Pej” was a great influence.

“I appreciate everything John Rudge did. Even now, I still have a chat with him and Mike Pejic.”

Once he’d finished his playing career, Andy enjoyed a successful coaching role with the youth team and was responsible for notable cup wins over Bolton and Spurs as well as bringing several players into the first-team. Did he enjoy his spell as Vale coach?

“Yes, but first I didn’t want to give up my playing. Grewy and Foyley eventually persuaded me to hang them up. We had a good youth side and was a good time. My only disappointment is that we had seven lads progress to the first-team but there was no coach there to prepare them for the first-team experience. Several of those lads didn’t make it as a result. If the money had been there to have another coach in place then perhaps that gap could have been bridged. But that’s lower league football club budgets for you!”

We’d almost reached the end of our chat but there was time for Andy to say a few words to the Vale fans on OVF.

“I appreciate all your support. I always gave 100% and I think that’s why the fans liked me. I maybe didn’t have the skill but I did give it 100%. Even now, talking to people in Stoke, I always have time to have a chat because they are such good people.”