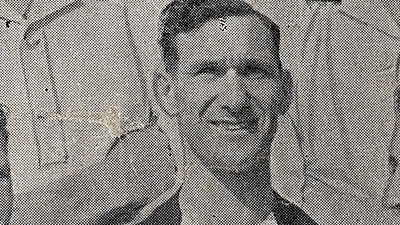 Barry Edge is an exiled Valiant living in Western Australia. Here he shares with us his memories of 1954.

***
Memories of 1953 and 1954
The recent appointment of Sven-Goran Eriksson as England manager prompted yours truly to reflect back to the time when it seemed English soccer stocks had reached its nadir – perhaps never to recover. In doing so I began to recall other sporting events that shaped our world. Of course Port Vale featured prominently.

Yours truly was just 12 years old when the halcyon clime of the Potteries was temporarily shattered by Port Vale’s dizzy FA Cup experience. Yet, for all the excitement of beating Cardiff and Blackpool, and of meeting West Brom in the FA Cup Semi Final, some of my recollections of 1953/54 are somewhat blurred, whilst others remain as clear as a bell. It’s useful then to be able to give some clarity via memorabilia.

As a boy I used to collect photographs of special events from the Staffordshire Sentinel, other newspapers and books. I still have some of them – mainly sporting ones. Others have been lost in the several moves from Bucknall, Stoke-on-Trent to Perth, Western Australia. Those that are left have worn thin and become brown with age. But with or without the memorabilia 1953/54 is remembered for a number of reasons including: West Brom bringing the FA Cup to the Midlands; Wolverhampton Wanderers winning the league championship for the first time; that great first sub four minute mile of Roger Bannister – six weeks later Australia’s John Landy, competing in Finland, lowered Bannister’s record; and Tom Finney was voted ‘Footballer of the Year’.

Somewhat ironically, I still have a picture of Ronnie Allen converting that penalty to give West Brom a 3-2 win over Preston, and in doing so denied my favorite non Port Vale player – Tom Finney – from gaining a ‘Cup winner’s medal. Also in my collection is a faded picture of Roger Bannister reaching across the finish line to give him that famous 4 minute 59.4 seconds mile.

Then there was the great Jim Peters, man of marathons, and his agonising staggering to the finish line in the 1954 Empire Games. He had entered the Vancouver Stadium, Canada some 15 minutes ahead of the field and in my mind’s eye I can still see the television pictures of him trying desperately to reach the finish. He was staggering from one side of the track to the other when approximately 200 yards from home he appeared to stagger slightly into the in-field area. Almost as quickly an official, later identified as his manager, gave Jim a helping hand back onto the track. The great Jim Peters made it – just. He collapsed and was immediately rushed to a nearby hospital. His physical tragedy may have been over. But when later told he had been disqualified for being helped back onto the track he was emotionally devastated.

Of course, Roger Bannister extracted some revenge over his archrival John Landy by winning gold in the mile event at the same Empire Games. That famous Bannister ‘kick’ 150 yards from home saw him pass and leave Landy some 15 to 20 yards adrift at the finish.

The only picture I have of the 1953/54 Port Vale side shows Ken Fish (Trainer) putting Jack Cunliffe, Ken Griffiths, Reg Potts, and Albert Leake through a training session.

I did have one of Stan Turner, photographed near his home in Bentilee next the fields of Brookhouse Farm. He had just given an interview to the Staffordshire Sentinel prior to the trip to Villa Park and a showdown with West Brom. Sadly, that’s one of the pieces of memorabilia lost from my collection.

It was the year when England defeated the world cup holders’ Germany 3-1 at Wembley. Yes that was special too, particularly after the nightmare of being beaten 6-3 by Hungary at Wembley in November 1953 – and that was only a ‘friendly game’. English soccer was still trying to analyse how it could have happened when in May 1954 another 7-1 drubbing by Hungary in Budepest piled depression upon depression.

Also in 1954 the MCC, for the very first time went by air, rather than by sea, to meet its international cricket commitments in the West Indies – with England winning the series 3-2. Another happy memory.

Nationally, it would appear that athletics and cricket were still in reasonably good shape. Not so soccer. And whilst the nation was still grappling with the question of ‘what was to be done’ to repair the damage, along came Wolverhampton Wanderers to restore some national pride and credibility by beating Hungary’s Honved 3-2, a side that consisted of at least five Hungarian national players – including Kocsis and Puskas. It was an early Christmas present that went some way towards healing the wounds. And, no doubt, Billy Wright would have been delighted to have ended 1954 on such a good note.

One blurred memory places me in front of our television set in Bucknall watching an international schoolboy football match being played at Wembley between England and Scotland – with the young players being credited with international caps. The crowd…approximately 90,000. That’s right, 90,000. And I vaguely remember the commentator saying the gate receipts, in excess of £16,000, would be a world record for junior football. England won 1-0.

Then there was Port Vale’s journey to the FA Cup Semi Final. Now that was very special indeed.

Of all the memories of ‘Vale’s FA Cup successes it’s the Blackpool game that remains indelible for reasons other than watching from the terraces. Not that there was ever a chance I would be allowed to go to the game in the first place.

My dad was a shift worker at the Michelin, and the day the tickets went on sale for the Blackpool match he was rostered on duty. So he asked mum if she would go and get a couple for him. After all, dad added, she was a Smallthorne/Burslem girl and it would give her a chance, maybe, to catch up on some old friends. “And take Barry with you for company”. She turned 99 in September, and even to this day she still muses, even laughs that she went along with dad’s request.

We had seen the might of Stanley Matthew’s FA Cup triumph of 1953 on our black and white television set. It had double doors to protect the screen when not in use, and had been bought just before the FA Cup and Elizabeth’s Coronation. Coincidentally, and following on from the Queen’s recent 2000 ‘down under’ tour, our local TV broadcaster screened an edited version of Elizabeth’s big day. The pomp and ceremony, grand designs, and the 200 year old Coronation coach were as I remember them. But this time it was in colour.

Anyway, as I was saying. Watching Blackpool lift the FA Cup on a black and white TV was one thing. Seeing them in the flesh, and particularly playing against the ‘Lads at Vale Park, would be something else altogether. My dad was definitely going to be a part of it.

On the day in question we made our way to Vale Park in weather that could best be described as ‘miserable’. But to me it didn’t matter much. I was with my mum, and we were going to get tickets for dad. On our arrival Hamil Road was a sea of faces – men, women, and lads just like me. So we queued and waited in the rain. Although I cannot recall much of the conversations of the day, mum says there was a mix ranging from winning to losing against Blackpool. Some were said to be buying tickets simply to watch Stanley Matthews. And those who used inappropriate language were checked by their peers that women and children were present.

There was a reserve football match scheduled with most ticket buyers entering the ground to watch it. But as soon as we got dad’s tickets we left and went to visit one of mum’s sisters in Smallthorne. When we eventually arrived home with the ‘golden prize’ dad was, in my Uncle Ozwald’s words…”dead chuffed”, and mum was happy it was over and done with. But little did she realise then that she would be asked to repeat the favour for the match against West Brom.

It is difficult to know whether my recall of 1953/54 is in any way connected to the success of the ‘Lads. At least I’d like to think so. Would I have collected the now thin and brown with age memorabilia? At the very least the happenings of 1953/54 heightened my desire to collect newspaper and book pictures. Prior to that I had kept a small book of jottings of some of the events that, to me, seemed important at the time. Sadly to say it is one of the lost pieces of memorabilia.

Ah…1953/54. Whilst English soccer stocks were at an all time low, Port Vale was riding high.