The Autoglass Trophy Final 1993: John Rudge’s side win the club’s first domestic trophy on their first visit to Wembley stadium. 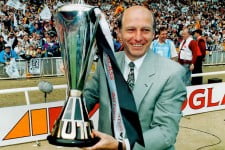 See our complete coverage of the Autoglass Trophy final

It was Port Vale’s first domestic trophy and we’ve covered it in full in our special area.

See all our features, images and a video of the full 90 minutes…

Match Report in the Telegraph

Gazing down on the famous sward you half-expected to see Arsenal and Wednesday still slogging it out. But this was a different Cup Final, a lesser occasion but an infinitely better match, with hardly a foul until the last nail-biting minutes and nary an offside as Port Vale, at Wembley for the first time in their 117 year existence, defeated Stockport County to collect the Autoglass Trophy.

Familiarity might have been expected to dull the edge of this contest since it was the third time these clubs have met in seven days. Vale, having edged out Stockport 2-1 on aggregate in the Second Division play-offs will be back beneath the twin towers next Saturday, playing West Bromwich to decide who goes into the First Division next season.

If they are involved in a match anywhere near as exciting, the old place is in for another treat. Vale, especially in the first half, were high quality, as you might expect of the older and wiser heads amongst their line-up. They had the only two bald heads on view, too, in Aspin and Foyle (three if you included long-serving manager John Rudge).

Vale’s central defender Swan got in a superb tackle to deny Beaumont the chance of an early goal for Stockport and had his reward for this within four minutes as his team went in front. It was the first of three excellent scores. Slaven started it as he collected a loose ball in midfield and flicked through between Miller and Todd for Kerr to sprint on and pot his fourteenth of the season.

Eight minutes before half-time Port Vale went two up when Glover crossed and Foyle turned the ball into the path of Slaven who directed it wide of Edward’s outflung left arm.

Stockport had hardly managed a look-in but right on half time Francis pulled one back from the by-line only for Taylor to hack it away from danger.

Vale almost went three ahead before the Stockport revival. Four minutes into the second half Porter sent through by Kerr, got the ball past Edwards but Wallace shepherded it safely past the far post.

The introduction of the lively Preece immediately offered more space for Francis. First the towering Stockport striker bundled the ball out of Musselwhite’s hands, then forced the Vale keeper to save in the air and on the floor.

Stockport’s pressure deserved reward and it came in the 66th minute. Francis started the move with a pass to Duffield and got upfield rapidly enough to meet the cross and divert it unerringly over the advancing Musselwhite’s head.

Stockport stepped up the pace, Vale wilted and tempers began to fray. Kerr was booked for tripping Ward near the end of regular time and in injury time Swan and Francis paid the penalty for pushing after a foul by the Stockport man on Musselwhite. Vale’s supporters will have regarded the wait as worth it. Perhaps they’ll have something else to cheer about next Saturday”.

Port Vale at Wembley. Who could believe it… certainly not me. The wedding day was all agreed, yes May 23rd(?), that sounded ok by me, the season would be over and I needn’t have a radio close to hand whilst supping champagne and going through the wedding vows with the usual nervousness of a wedding ceremony.

To be honest, I wasn’t sure whether I wanted us to win the Northern Division Autoglass final, how could I ignore Vale at Wembley and go to a church instead? It was all arranged, surely I couldn’t let her down, she was beautiful, every man’s dream.

No, I’m sorry, for once, Port Vale had to take second place that day. It was my decision and that was that. I must admit I felt more sorry for my brother, a Vale fan for 30 years and he was to miss our first visit to Wembley. What could a Best man do in his brother’s hour of need?

I remember as a schoolboy (Wolstanton Grammar) saying I will never go to Wembley until the Vale went there, I half believed that I would never get to Wembley but I also believed in miracles. Port Vale was all about romance. You didn’t support Port Vale because you would be awash in glory every season, it was much more than that. It was a club of romance but I was suddenly devoured by romance of a different kind.

The BIG day arrived. My first guests arrived, Vale were one nil up and playing like Real Madrid. One hour later and we had just finished the main course, I was approached by the Toast master who whispered ‘2 : 1 to Port Vale, Sir’. YES, that was it, what a day this was, what more could a man ask for, surely dreams could never be this good.

I managed to contain my joy as best as possible. I couldn’t spoil it for my brother who was rushing off after the fun to watch the match on video without knowing the score. I also remember his Best Man’s speech with references to Vale’s trip to Halifax and other such occasions.

I managed to watch the match the following day before jetting off on honeymoon to Kenya regretting the next instalment. Missing our first visit to Wembley was a big sin, but how unlucky could I be, yes, I missed the play-offs the following week. Little did I know that that one was a blessing. So what’s my new goal, well I did see Vale against Genoa, so it must be to see VALE WIN AT WEMBLEY.

Just as a closing note, the marriage lasted six months and I was to live to regret my Wembley miss on May 23rd!! Perhaps I shouldn’t have taken my very close female friend to Brighton to see us gain promotion the next season… but that’s another story!!!

Thanks to Gerard Austin for many of these Autoglass images

Firstly, we have the full ninety minutes of the game. This is an exclusive video on our YouTube channel. You can watch it below:

And here are some celebrations: