Port Vale manager Martin Foyle is reportedly close to adding a new loan striker to his squad ahead of the weekend fixture with Oldham Athletic. 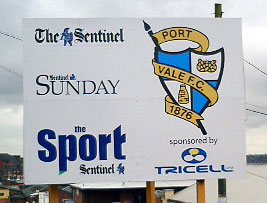 The Vale boss is keen to acquire cover for injured duo Nathan Lowndes and Ian Armstrong plus Lee Matthews, who has just returned from injury. It leaves inexperienced duo Hibbert or Eldershaw fit topartner Billy Paynter, so Foyle sees a forward as a priority.

According to the Staffordshire Sentinel Foyle has agreed loan terms with a club regarding a player who is returning to fitness. If the player proves his fitness in a reserve game this week then a deal could be struck.

The Valiants missed out on Hull striker Delroy Facey earlier this week when he opted to join Huddersfield Town on loan.